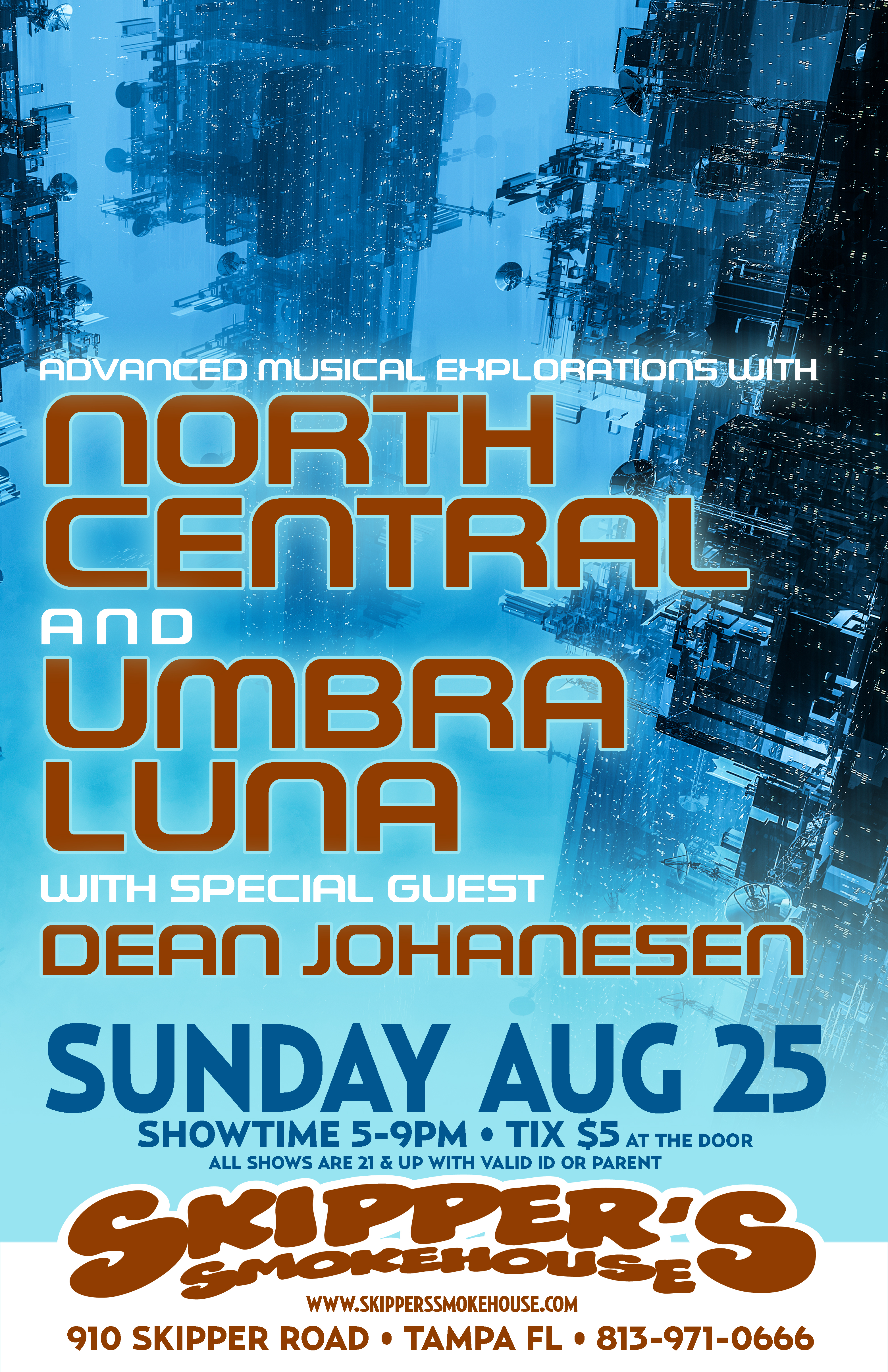 North Central (rock/jam/prog/soul) This new-to-the-scene sextet includes both familiar faces and fresh blood playing a invigorating mix of prog and groove that feeds the minds, soothes the soul, and shakes the ass. Lead vocalist Cakes (real name a closely guarded trade secret) banishes a soaring soprano like a lightsaber in the darkness, bringing a radiant presence to the proceedings. Drummer Fred Smith was a long-time musical co-conspirator of the late-great Rayzilla; Smith is also a published author. Originally from Philadelphia, bassist Daniel Miller performed with Finless Brown, a Japanese hip-hop/soul band out of San Francisco in the mid-‘00s. These days, in addition to holding down the low end with North Central, you’ll find him sunlighting as a Social Studies teacher at Tampa’s finest performing arts high school. Of all the guitar players that call Tampa Bay home, Mark Warren is unquestionably one of them. Beginning in the late ’80s, Warren has been a continual (habitual?) fixture on local stages with bands including Vodkanauts, Barely Pink, Sara and the Aeromen, Sara Rose Band, as well as award-winning theatrical productions with Jobsite Theater, the resident theater company at the Straz. Plagued by an unhealthy obsession with vintage and analog keyboards and Miles Davis recordings, Michael is a Pulitzer Prize-winning former New York Times journalist, current media exec, and musician who spent his misguided youth gigging and reveling in the magical Gainesville, FL music scene of the ‘80s and ‘90s. When not rocking out with North Central, Michael performs his one-man-band solo act throughout Tampa Bay. The trombonist who calls himself Rob Clark (aka futuresouund) has heavily encoded his bio to protect sensitive information: amdjxhdjdjchsndjfjrjzhcdijxjxj freelance and Jen Jen djcjfjdjdjjcjc very poor dhshccjddsjjfhsh COMPLETELY DESTROYED djdhcejaoduenxncjdjhchd Elementary Music Teacher cause kids rock sjdjdifivjfjdhshcdjdnc still running in terror.

With the more-than-able assistance of bassist Leo Binetti and drummer Royse Bassham, no-nonsense guitarist Joe Sanders means business with his new trio. Sanders’ guitar has blistered national and Tampa Bay stages for more than 30 years with bands like Deva Deep, Freaks Rule, Starbelly ,Lexicon Devil, Shadowcraft, The Black Honkeys, Four Star Riot, Death, and Love and Addiction, as well as Led Zeppelin tribute band The Crunge. In the mid-2000s, Sanders worked with mega-producer Silvia Massy (Prince, The Red Hot Chili Peppers, Johnny Cash, Tom Petty, Tool) on Basic Rock Outfit’s 2007 national release “Thank You For The Pain” on 101 Distribution. Two independent solo records followed (It Is What It Is and Blackbird) between 2009 and 2011 while playing hired gun for the best singers and bands in the Tampa Bay area. Forming Umbra Luna in 2018, Sanders can now concentrate on “just the music,” vocal-free.

Originally from New York, accomplished singer/songwriter/guitarist Dean Johanesen has made his home in many parts of the US including, Indiana, Nevada, Georgia and Florida. Johanesen’s mother delivered motor homes when he was young and the family traveled around listening to many different artists and kinds of music. Led Zeppelin to Simon and Garfunkel, classic country to musical soundtracks provided the soundtrack to his youth and his diversity of influences had an effect on Johanesen’s interests musically as well as giving him a feel for the road.

In 2013, Johanesen released his first solo record with intentions of getting back to the importance of the storyteller songwriting format while a recent passion for gypsy jazz music in the vein of Django Reinhardt has put Johanesen on a musical path with a focus on new stories of old times. Non fictional characters from the ’20s and ’30s, circus performers, the side show, Prohibition, the war of currents all placed in a backdrop of gypsy swing.