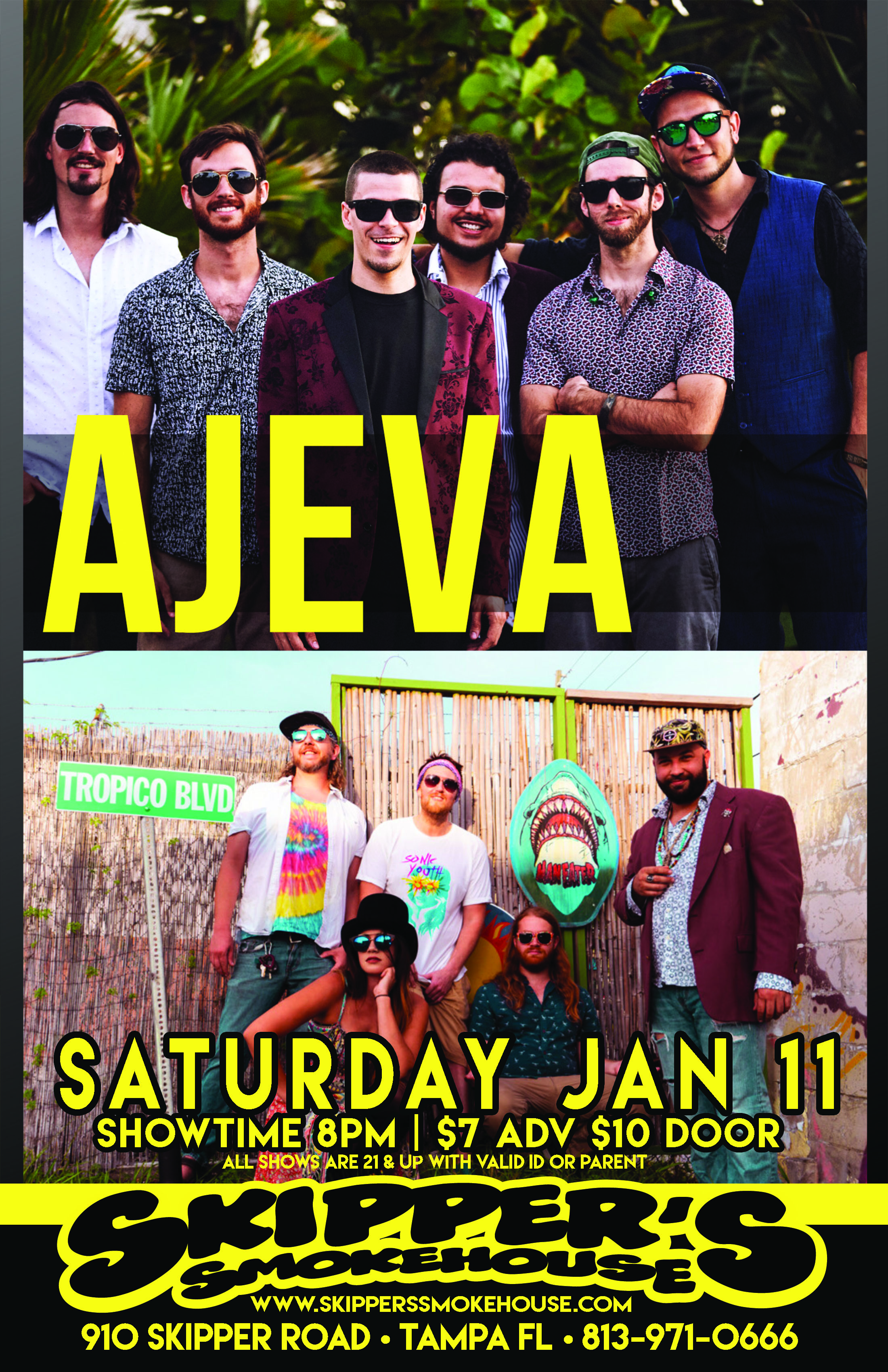 Ajeva AJEVA (ah-JAY-vuh) is a Progressive Funk, six piece powerhouse hailing from St. Petersburg, FL. They spread their message of peace, unity and higher consciousness through music with infectious grooves and driving energy. Composed of Reed Skahill (lead vox/guitar/keys), Taylor Gilchrist (bass), Travis Young (drums), Mark Mayea (lead keys), Elliot Dickenson (guitar) and Michael Nivens (lead guitar), Ajeva has been playing all over Florida and the South-East since March 2013. These gentlemen pride themselves on providing the ultimate voyage for your earholes, with an enthralling live show that will keep you watching and listening. www.ajevamusic.com

Tropic Blvd Founded in Brooklyn, NY by singer-songwriter and multi-instrumentalist Miguel Lantigua in 2014 with friends and local musicians. Tropico Blvd’s first show was at a loft party, yet the band quickly made a name for themselves with their eclectic songwriting, grassroots use of social media and unique live performances. The band, led by Lantigua, played many local shows ranging from secret basement parties to festivals, cozying up with local New York City jam bands such Polyvamp & Formula 5. After a copy of Lantigua’s demo got into the hands of an engineering assistant of producers Dan Grigsby (Joe Cocker, Rolling Stones) & Ron London (Dave Matthews Band) the two offered to help him record parts of what would later become the groundwork for most of the initial Tropico Blvd material..

In 2016 Lantigua moved to St Petersburg, FL to reform the group and began performing with a new incarnation of the band that included bassist Dan Gaily & drummer Adam Mann. The trio would spend hours honing their sound and in late 2017, guitarist and vocalist Audrey Short & NoNeed keyboardist and saxophonist Cody Moore joined the lineup increasing their production and sound significantly. The combination of Short and Lantigua’s vocals add a sound not seen in other bands and have currently use this as part of their defining sound. The band would spend the better part of 2018 tightening their live act with a residency at Ringside Cafe in downtown St Petersburg where they work shopped their original songs while perfecting their production.
It was one of these nights that lighting technician and liquid light artist Don Becknell saw the band with no lights on stage but was so impressed by the music he offered to become Tropico Blvd’s light technician and has been with them ever since. They also started including multi-instrumentalist Kyle Sareyani on percussion when the band performs as a six piece and covers on keyboards for Cody Moore when he’s touring with The Hip Abduction. Sareyani adding polyrhythmic world beat elements and backing vocals bringing a lush fullness to the group and creating powerfully dynamics. With this growing muscular sound, the band hired musician and performing artist Billy Beck as their sound technician after one Ringside show where the band couldn’t troubleshoot their sound equipment. The band hired Beck on the spot for his ingenuity and quick thinking and the family continued to grow as Addison Tabb became a promoter and booker for the band increasing the band and crew to almost a dozen. As a six person band with two main vocalists and additional back up vocalists, saxophone, keyboards, percussion and searing guitars and violin, Tropico Blvd bring a mixture of sounds that is truly reminiscent of roots, Americana, indie, funk, soul, bluegrass, disco, jazz and rock that is not only purely genuine but purely their own.
2019 Proved to be a productive year for Tropico Blvd as the band continued to perform extensively and being featured in festivals like Orange Blossom Jamboree and Geckofest, performing live on WMNF Artist Showcase, spotlight shows all over the Tampa Bay area. The band and crew share a sense of community and the band employs the improvisational sensibilities inspired by jam bands such as the Grateful Dead and Phish where shows are typical multiple sets, with musical segues and where rarely any two show’s set lists are alike, this mixed with their musicality and songwriting keeps fans coming back for more.
In early Spring the band recorded their first studio single ‘The Rails’ and released it under their independent label Elsewhere Productions where they also plan to release music for each member’s solo projects including BIlly Beck, Miguel Lantigua and Audrey Short’s project OhMegAud.
Tropico Blvd is currently producing material for their next album ‘Neighborhood Watch’ and are planning on touring to a city near you!