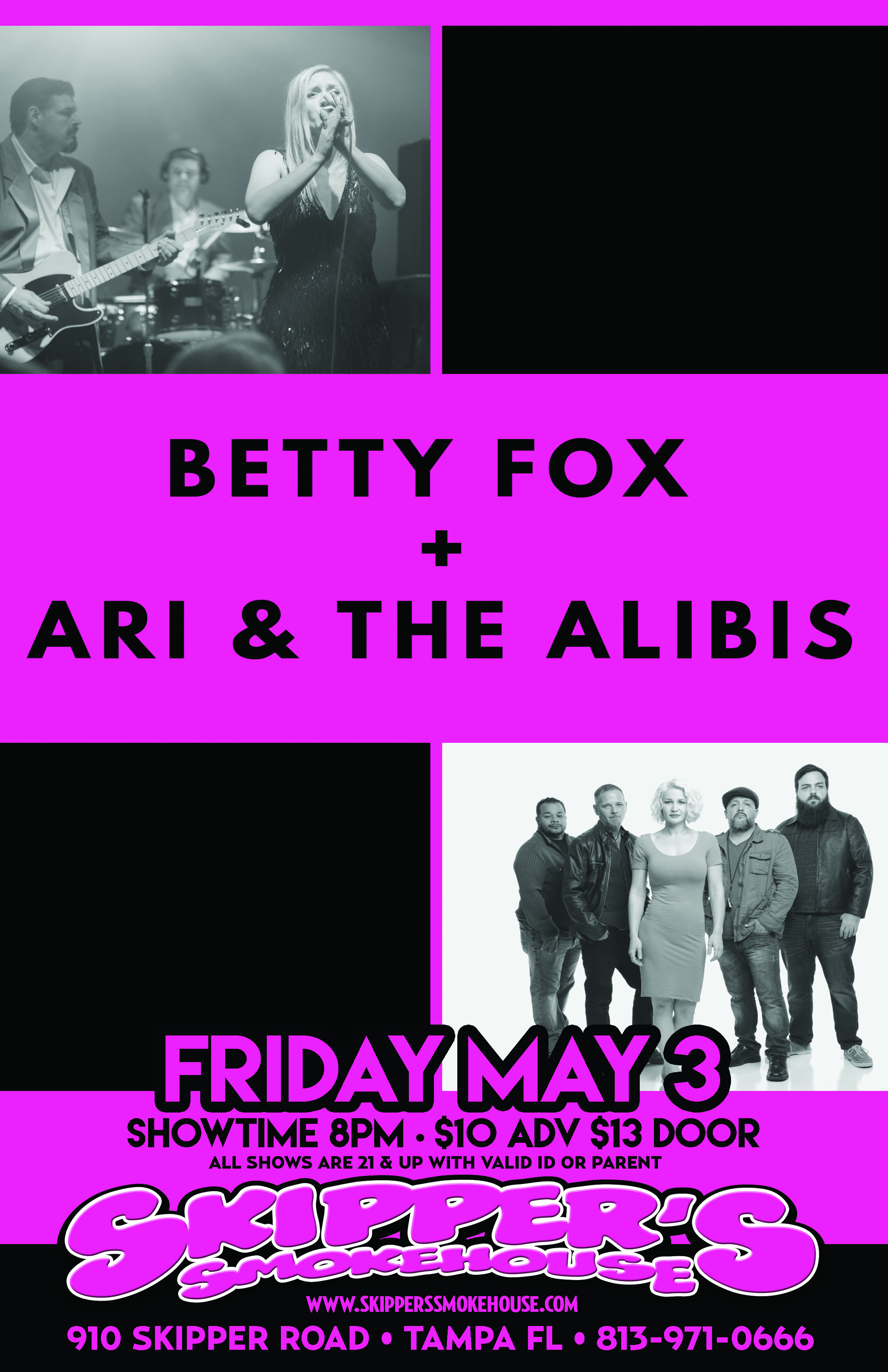 With an extensive background in gospel and a lifelong passion for soul music, Betty Fox has come a long way from her southern roots to headlining festivals and captivating thousands with her raw swagger and unwavering talent. Now the 2015 representative of the Suncoast Blues Society, an International Blues Challenge Finalist, and 2 time winner of Creative Loafing’s Best of the Bay, she is truly proving herself a force to be reckoned with.

Betty Fox appreciated singing early in life and performed for the first time at a church play at the age of 4. Her family had a deep love for southern country gospel and tight harmonies which they would express at every Easter, Thanksgiving, and Christmas, and that is where her affinity for music began. “My uncle Fred would pound on the keys with his monster hands while my (rather large) family and I would all gather around the piano… My grandmother would stand behind me and my cousins would hold my hands as we all sang four and five part harmonies to songs like “It Is Well With My Soul”, “The Old Rugged Cross”, and “Till the Storm Passes By”. To this day, those songs and those moments mean more to me than anything”, Fox says.

After honing her craft for 20 years, her debut album, “Too Far Gone”, put her on the international map as a songwriter and vocalist and had the critics from American Blues Scene Magazine to Blues Revue Magazine singing her praises! Her Sophomore album, “Slow Burn” was released in June 2015,  and is already receiving rave reviews from Blues DJ’s, critics, and enthusiasts around the world! It will surely take her farther than she ever imagined.

To support her talent, she has carefully selected musical heavyweights  Barry Williams on bass, and Josh Nelms on guitar to set herself up for nothing less than well deserved success. In fact, in the past year this dynamic quartet has skyrocketed to the Florida spotlight, playing on multiple notable music festivals including the world renowned Tampa Bay Blues Festival, and the largest free music festival in the US: Springing the Blues. This band has competed in the International Blues Challenge making it to the finals 8 of 150 bands! They have opened for such artists such as Mavis Staples, Lucky Peterson, Jimmy Thackery, Marcia Ball, Southern Hospitality, and The Meter Men, for crowds amassing over 6,000 screaming fans! As many will tell you, you definitely don’t want to miss this one of a kind musical experience! https://www.bettyfox.net

Everyone Needs an Alibi: Multicultural Fusion Artists Ari and the Alibis Give You One

Infusing Funk, Jazz and Samba with Blues Soul and Rock, Ari and the Alibis have created a memorable ear-catching sound. Formed in September of 2013 Ari and the Alibis quickly became one of the top acts in their native Tampa Bay music scene, as evidenced by their 2015/16 nomination for best local band in Tampa Bay and Ari for best Jazz vocalist. They also received Grammy nods in two categories: Best Rock Song (Dirty Little Secret) and Best Rock Performance (Dirty Little Secret and Bon Appetit).  Their highly anticipated sophomore release “Home” was released June 15th 2018. An all original 15 track 76 minute long album that captures the versatility as well as the virtuosity of the group. The title track “Home” has already received an award for “Best original song by a local group” in the Bradenton Times “Best of the Bay” and are nominated for best regional band in Tampa Bay’s Creative Loafing readers poll of the same name.

2018 has also been a banner your for artist endorsement for the group. After their performance at the 2018 winter NAMM show the group signed an artist deal with Sennheiser North America who provided all microphones for the recording of “Home” as well as in ear monitors, wireless systems and microphones for their live performances. Two months later James Dabone became the first Trombonist to sign an artist deal with Cannonball Instruments.

2019 is looking to be another exciting year for the group with friend and international tour manager Michael McGinn planning a tour for them in the UK and a return visit to Canada already in the works.

Their high energy live show has landed them performance slots at renowned venues such as Skippers Smokehouse, Janus Live and the Tampa Hard Rock Casino. Their music has also spread well beyond state lines with shows in New York, Cleveland, Atlanta, Asheville, New Orleans and Austin. This past summer (2018) they expanded into Canada with concerts in Ottawa and Hamilton Ontario. On their way home they were honored to be guest performers at Victor Woods nature camp Wooten Woods outside of Nashville Tenn.

The group is comprised of five talented members: Arielleh “Ari” McManus (pronounced R.E.) on vocals, Nicolaas Kraster on guitar, James Dabone on Trombone, Omar Rodriguez on Bass and Damon Owens on Drums. Particularly notable are Ari’s powerhouse voice, filled with emotion and strength that grips the listener from the very first note, as can be experienced on their album “Dirty Little Secret”. Recorded in two sessions a year apart the album exemplifies the true talent and diversity of the group. The fifteen track CD takes the listener on a musical journey where anything is possible. https://www.ariandthealibis.com