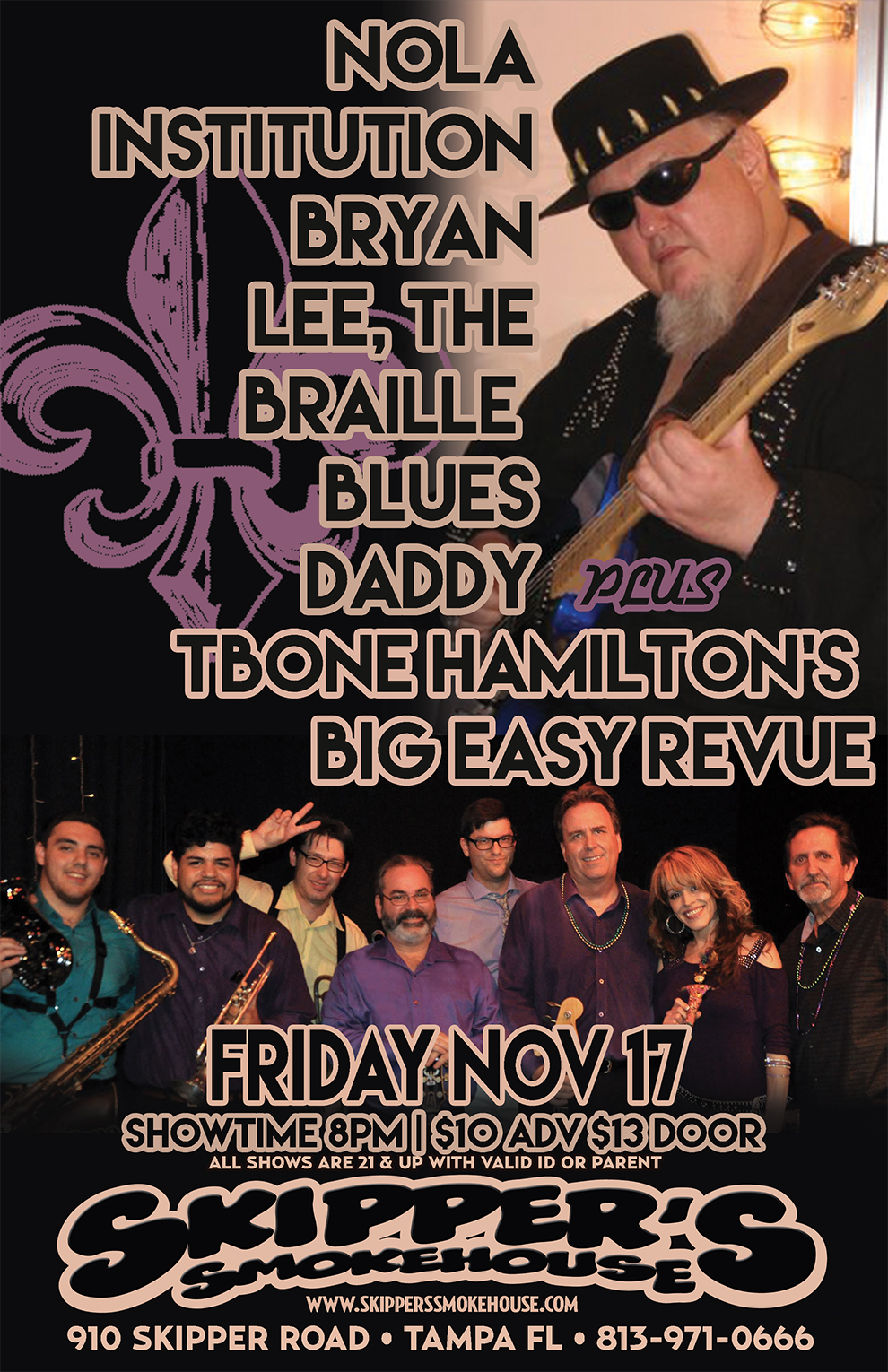 Bryan Lee, Braille Blues Daddy (NOLA) Bryan Lee lost his eye sight and was legally blind by the age of eight. Bryan Lee had an avid interest in early Rock and Roll and Blues Music which was fostered through the 1950’s late night listening sessions from the Nashville Music radio stations such as WLAC. This is where Lee was first introduced to the sounds of Elmore James, T-Bone Walker and many other influential bluesmen. The man now known as “Braille Blues Daddy” started out playing for Midwest crowds at the early age of 15. In the late 1950’s, Bryan Lee opened for Bill Haley & The Comets with his band “The Glaciers” performing cover music of Elvis Presley, Chuck Berry and Little Richard. By the early 1960’s and throughout the 1970’s, Bryan Lee’s musical interest turned to the sound of Chicago Blues while touring throughout the Midwest. He was heavily influenced by Chicago Bluesmen Muddy Waters, Howlin’ Wolf, Hubert Sumlin and Freddie King. While on tour in the 1980’s Bryan opened for one of his hero’s Muddy Water’s. After the show Muddy told Bryan: “Bryan, stay with this, one day you will be a living legend.” – “I went home and I cried” says Lee. Although his acceptance in the Chicago Blues Scene didn’t come until later in his career, Bryan has the respect of his friends and peers such as Buddy Guy and Lonnie Brooks. Bryan Lee and his band frequently pack the Legend’s house performing authentic blues. In the late 1970’s Bryan fell in love with the city of New Orleans and eventually moved to the Crescent City on Jan 6, 1982. Bryan Lee has been a fixture of the French Quarter music scene ever since. His guitar brings the Chicago styled blues of Luther Allison, as well as Albert King and Albert Collins  down to the Crescent City.  Bryan Lee made his stand, performing 5 nights a week for over 14 years at the Old Absinthe House.  Bryan gained the nickname “New Orleans Blues Institution” from Quint Davis, producer of NOLa Jazz and Heritage Festival, of which Bryan has performed at for 26 years now. During the 1990’s Bryan and the Jump Street Five Band initiated a long recording deal with Justin Time Records from Montreal, Quebec, Canada.The collaboration and Lee’s individual sets would take him to recording 13 albums over two decades. http://www.braillebluesdaddy.com

w/ T-Bone Hamilton’s Big Easy Revue (NOLA FUNK) TBone Hamilton’s Big Easy Revue is an 8 piece horn band performing the musical styles of New Orleans funk, Texas blues, with a dose of some Jazz…..tossed in! Led by bassist Tom “TBone Hamilton” (Rock Bottom & the Cutaways, The Swinging Johnsons, The TBone Hamilton Band), the “Big Easy Revue” band, is the culmination of a life time of music. Mixing in many styles of American music with a special focus on NOLA funk. Tunes performed from the catalog of such artists as the Neville Brothers, The Funky Meters, Dr. John to name just a few. If you want a taste of NOLA – then come out and see AND HEAR this band. Guitar, Bass, Drums, Piano, and a three piece horn section. The band is comprised of best Musicians in the Tampa Bay area. If you want to dance your shoes off come see us! Laissez les bons temps rouler!!! www.thomasjhamilton.com