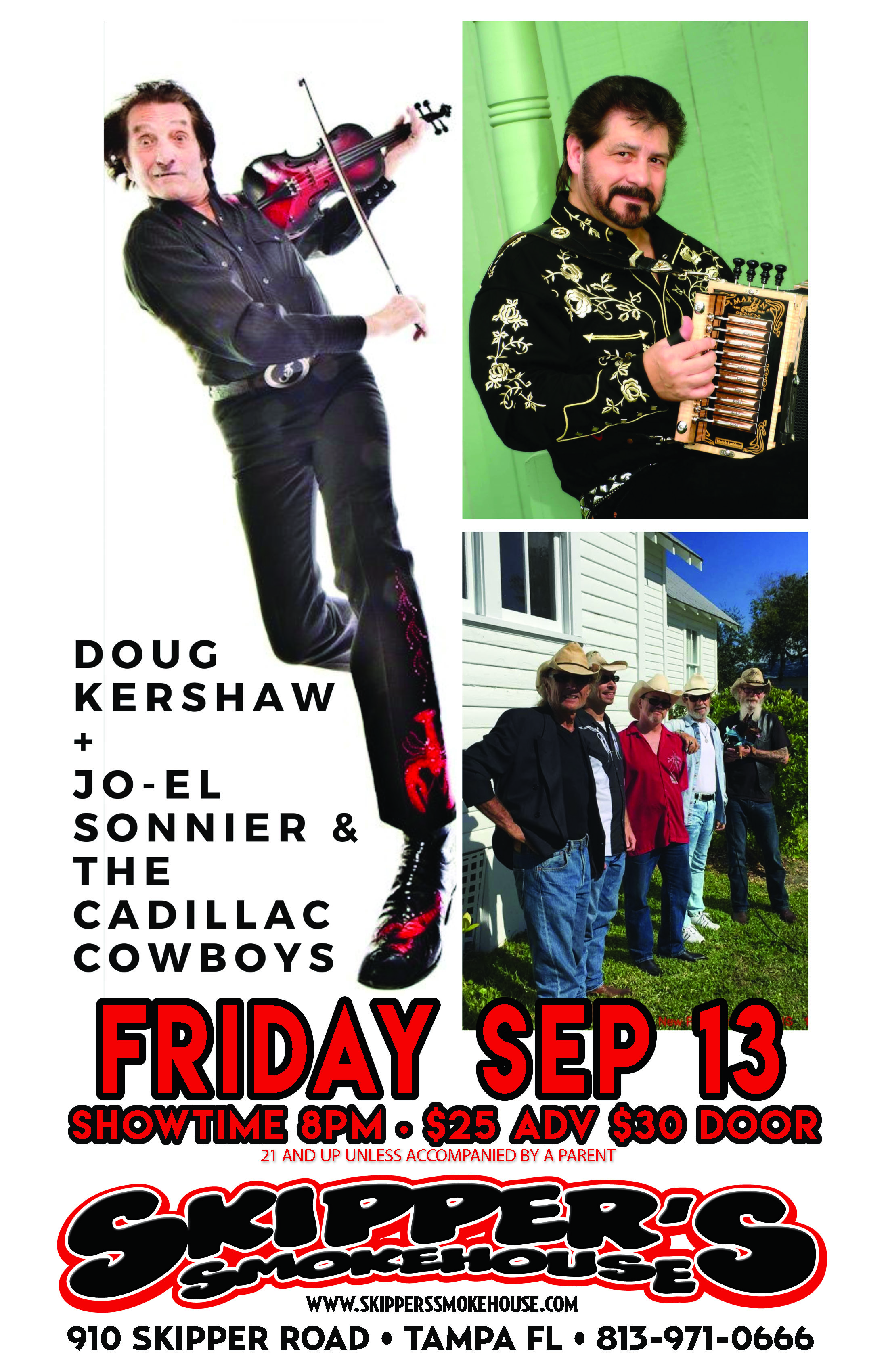 Doug Kershaw – Douglas James “Doug” Kershaw (January 24, 1936- ) Known as the Ragin’ Cajun, Kershaw won fame as king of Cajun fiddlers, taking the genre from his early days, raised in a musical family on a houseboat on a Louisiana Bayou, to international stages and television. Also well known as a singer and songwriter, his biggest hit song, the autobiographical “Louisiana Man” was the first song ever broadcast back to earth from the moon during the 1969 Apollo 12 Mission. Literally from the bayou to the moon, Kershaw has recorded fifteen albums and charted on the Hot Country Songs charts. He performed for years with his brother Rusty, and now Doug’s son Tyler plays drums in his band as well as manages his shows.

Starting at the age of 9, he has been captivating audiences with his live performances. In addition, he has had a prolific television career with his first network performance on the premier of the Johnny Cash Show with Bob Dylan. Other appearances include: Ed Sullivan; The Tonight Show with Johnny Carson; Mike Douglas; a regular on Music Country USA; Merv Griffin; Dinah Shore; Mary Tyler Moore Special; John Wayne Special; Midnight Special with Wolf-Man Jack; and a member of the Fiddlers Three with Itzhak Perlman and Jean-Luc Ponty. He wrote and recorded the title song for the movie Heavens Gates, the Mamou Twostep, and had acting roles in the movies Zechariah, Days of Heaven and Medicine Ball Caravan.

Even though he does not read or write music, he has composed thousands of songs, having recorded nearly 500 with labels such as Hickory Records, RCA, Columbia Records, Warner Brothers Records and Cleopatra Records. Songs such as Diggy, Diggy Lo, Cajun Joe, and Rita Put Your Black Shoes on are familiar tunes to Doug Kershaw fans, but none of his works reached the fame of his own story, “Louisiana Man.” In 1957 Kershaw became a regular member of the Grand Ole Opry. He was also a member of the Louisiana Hayride and the WWVA Jamboree in Wheeling WV.

Kershaw proudly celebrates his Cajun heritage worldwide, and with his infectious style of performing, he has made Cajun music as popular as many other forms of music. In 2009, he was inducted into The Louisiana Music Hall of Fame, and we are proud to honor Doug Kershaw as a 2016 Inductee into the National Fiddler Hall of Fame.

The music of Jo-EL Sonnier is a way of life. Steeped in passion, relentless dedication…he has been the undisputed “King of Cajun” for the past 25 years and occupies a significant place in the rich artistic landscape of this country. His fans are un-deniably dedicated, while the music industry elite – Dylan, Costello and Hank Williams Jr., to name a few, admire his work to no end. He is a “musician’s musician” with a wonderful gift to sing and entertain you in a way often imitated but never duplicated.

Jo-EL was born in Rayne, Louisiana to poor, French speaking sharecroppers. He began to play the accordion at three years of age, first as a toy to occupy Jo-EL while his parents visited with neighbors. As he grew, so did his love for the instrument and his ability to play it. Singing only in French, his Cajun heritage was very strong and clear. News of this gifted child spread, which led to a radio debut at the age of 6 and his first recording session at the age of 11. As a favorite in local clubs, Sonnier remained a Louisiana sensation during his early life, but decided to try his luck at recording Country music and in 1974 he signed a recording contract with Mercury Records. The success he sought after continued to elude Sonnier and after four years in Nashville, he decided to try his luck in California where he began performing solo shows with the help of many notable friends including guitarist Albert Lee and the Band’s Garth Hudson..

By the middle 80’s, Jo-EL had a Grammy nominated recording to his credit with Cajun Life. The recognition achieved with the success of Cajun Life provided the freedom to fuse Sonnier’s deep Cajun roots with country, rock, and other pop influences.   1987 brought about a new recording deal with RCA records and the result was Come On Joe. Containing several Top 10 hits including “Tear-Stained Letter” and “No More One More Time”. In 1988, Jo-EL was named by the “Performance Magazine”, “New Country Touring Artist of the Year.” Later Jo-EL was nominatedby the Academy of Country Music For the “New Male Vocalist of the Year Award”.His new album “Come On Joe” was the only Nashville album chosen by People magazine as one of the ten best albums of 1989. He also won Cashbox magazine’s New Male  Vocalist award.

As a songwriter, Jo-EL has had his songs recorded by artists such as Johnny Cash, George Strait, EmmyLou Harris,    John Anderson and Jerry Lee Lewis.   Although singing and performing are his first love, Sonnier has also done his share of acting in the movies. Among his credits you will find a role in “Mask” starring Cher and Sam Elliot. “A Thing Called Love,” and “They All Laughed” .   In 2006 Jo-EL received his 4th. Grammy nomination for his Newest traditional recording, titled,  “ Cajun Mardi Gras”.   With four Grammy nominations under his belt for his traditional French recordings, Sonnier continues to record and perform his traditional music to crowds around the world.   Although Jo-EL continues to color outside the lines ofNashville’s’ version of Country music, he continues to record his style of music for his fans to enjoy on his own Record Label, “Musique de’ Jo-EL.’   With the help of XM Radio, Jo-EL’s music is being discovered by a whole new audience through airplay of his Traditional Country recordings on Mercury Records in the 70’s.

In October 2009, Jo-EL was inducted into The Louisiana Music Hall of Fame. In February of 2011 he released his 30th album titled,  “Where’s That Music Comin’ From?” All who know him will agree that from his heart is where the music is comin’ from. In 2015 a dream he had held onto for many years finally came true when his name was announced as the Grammy Award winner for Best Regional Roots Music Album of the Year for his album, “The Legacy”. “Winning a Grammy is a great honor but I’m not ready to quit yet, I’ve still got plenty of music left in me” says Sonnier.In 2017 Jo-EL decided that it was time to release a fact about himself that had been hidden for his entire career. Sonnier has spent his life dealing with the day to day struggles of living with Autism. He suffers from a form of Autism known as Aspergers Syndrome.It wasn’t until he was a grown man that he was given the diagnostic which brought peace to him and finally gave him the answers to why he was always so different from others and why music was his entire world.”Once I had the answers, I decided that it wasn’t a disability, it’s what really gave me the ability to focus on my music when I didn’t fit into the rest of the world around me. It hasn’t always been easy and I still struggle with large crowds or new things outside of my normal routine but, with a great family and band and friends who understand me, I’m ok with just being me.”

2018 was the beginning of a new era for Jo-EL and he started out by releasing 2 new children’s books. The 1st. book, “The Little Boy Under The Wagon” is based on his early childhood and growing up different from most children. Hopefully it will encourage   children who are different, to follow their dreams and to  understand that they may be different but, being different is what makes them special. A Cajun cookbook was next on the agenda and was released in the Spring of 2018 along with his own bottle of Cajun Sauce called, “ Jo-EL Sonnier “Ayeee” Cajun Power Sauce”.

Known for his incredible stage performance, Sonnier has performed all across the world; in 32 countries and in all 50 states. Including the New Orleans Jazz & Heritage Festival and the Edmonton Folk Festival to performances throughout Europe and South America and Japan. Jo-EL is backed by six accomplished   musicians which he calls, “Tearstained Letter Band”. Signing autographs and talking to the fans,    Jo-EL gives 100% of himself at every show. Sonnier says, “I perform every show as if it was my last, and it doesn‘t   matter to me if there are only 25 people or 25,000 people in the audience , I still perform the same way”. Anyone who has seen his show will agree totally. One thing is clear, no matter where he is found performing, his passion and commitment to his music comes across in any language The Man, the Music and the Legend lives on……. . There is no doubt…Jo-EL Sonnier is “The Real Deal”.

Somewhere near the intersection of “Bons Temps Rouler” and the Clinch Mountain Backstep, you will find the Cadillac Cowboys serving up their musical gumbo.   Blazing fiddle, mournful steel guitar and rollicking accordion are served up alongside hot guitar licks and a kicking rhythm section.  Expect lots of rapid fire instrument changes and music that will have you out of your seat and dancing the night away.