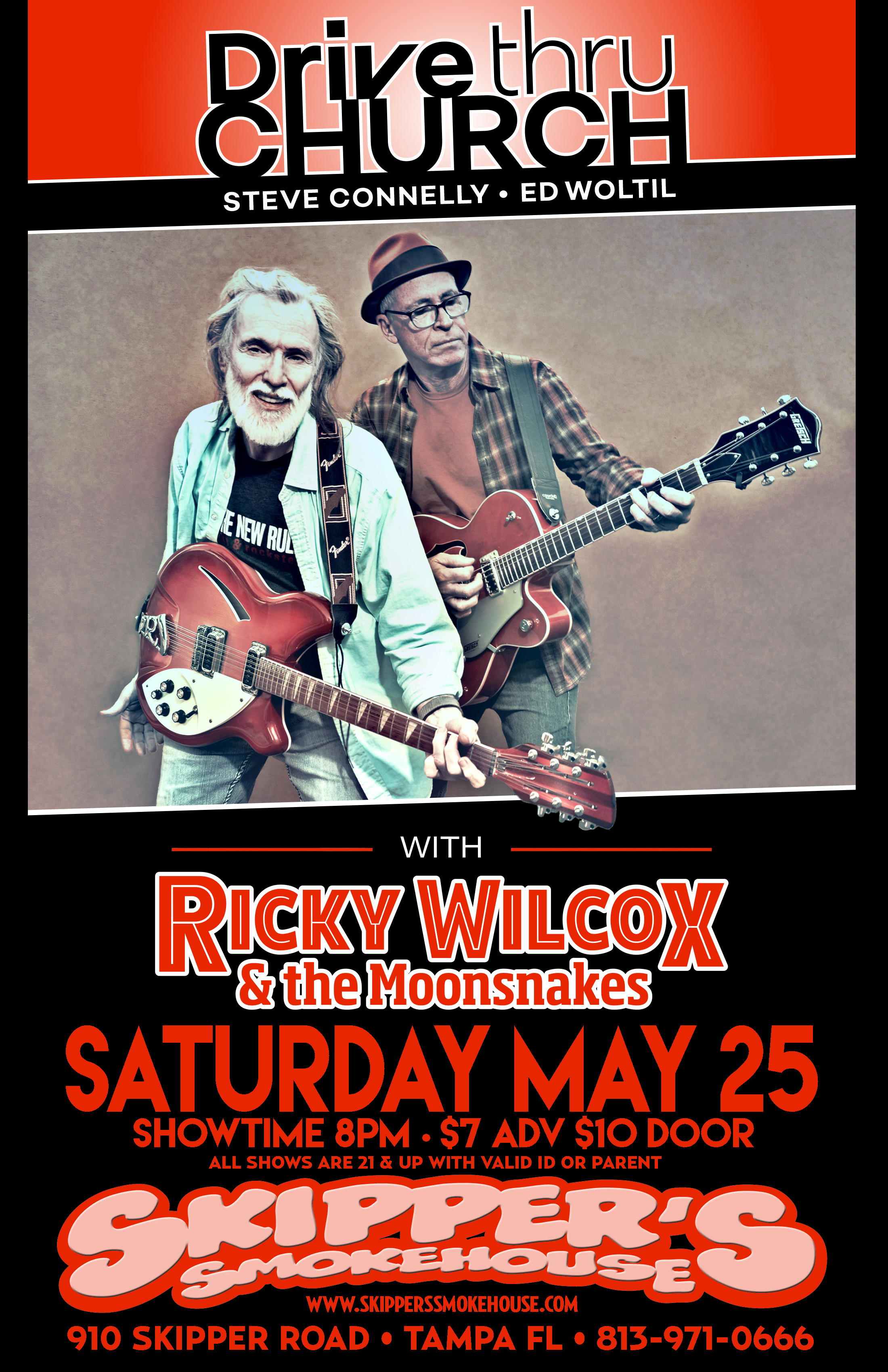 Drive Thru Church – Steve Connelly & Ed Woltil Back through the mists of time in a land known as the 80s/90s, two of Tampa Bay’s premier musicians were leading separate critically-acclaimed bands. Guitar aceSteve Connelly’s band, The Headlights, were Florida folk-rock pioneers, eventually jangling their way into the ears and heart of Roger McGuinn of The Byrds, who tapped them to tour the globe with him as their backup band. Connelly’s friend Ed Woltil was making decidedly more New Wave sounds with his power pop trio Mad For Electra, critical darlings known for their sharp, Beatlesque songwriting chops and lean, infectious sound.

Often sharing gigs together around the Bay, Woltil and Connelly became fast friends — and when both bands threw in the towel at roughly the same time, they joined forces to form Drive Thru Church, a musically adventurous project marked by their inventive twin-guitar assault and willingness to throw any genre into the mix.

As fate would have it, Connelly started up his famed Zen Recording Studio, an all-consuming process which left little time to devote to his own music. After a short run together, Woltil kept Drive Thru Church going awhile longer without Connelly.

Although they’ve never really stopped contributing to each other’s projects in the years since, Steve and Ed have often reminisced about the fully collaborative clamor of Drive Thru Church. It’s only taken *ahem* something-something years for them to pick up where they left off…Drive Thru Church rides again! https://www.facebook.com/drivethruchurch/

Ricky Wilcox and the Moonsnakes Ricky Wilcox and the Moonsnakes are a 4 piece power pop band featuring some of the areas most iconic players…Wilcox (ex- Deloris Telescope, now on guitar) brings his songs and vision to the Moonsnakes which also feature Steve Connelly (Ditchflowers, ex- Headlights) on guitar, originally Rick Boucher (The Edisons, Betty’s Not a Vitamin) and currently Alex Wolfe-Parnes on drums, and Jim Brown (The Ruins) on bass. Wilcox and the band’s latest release is the CD “Last Day on Planet Earth” on Sunshine Drenchy Records. https://www.facebook.com/Ricky-Wilcox-The-Moonsnakes-199260220094757/