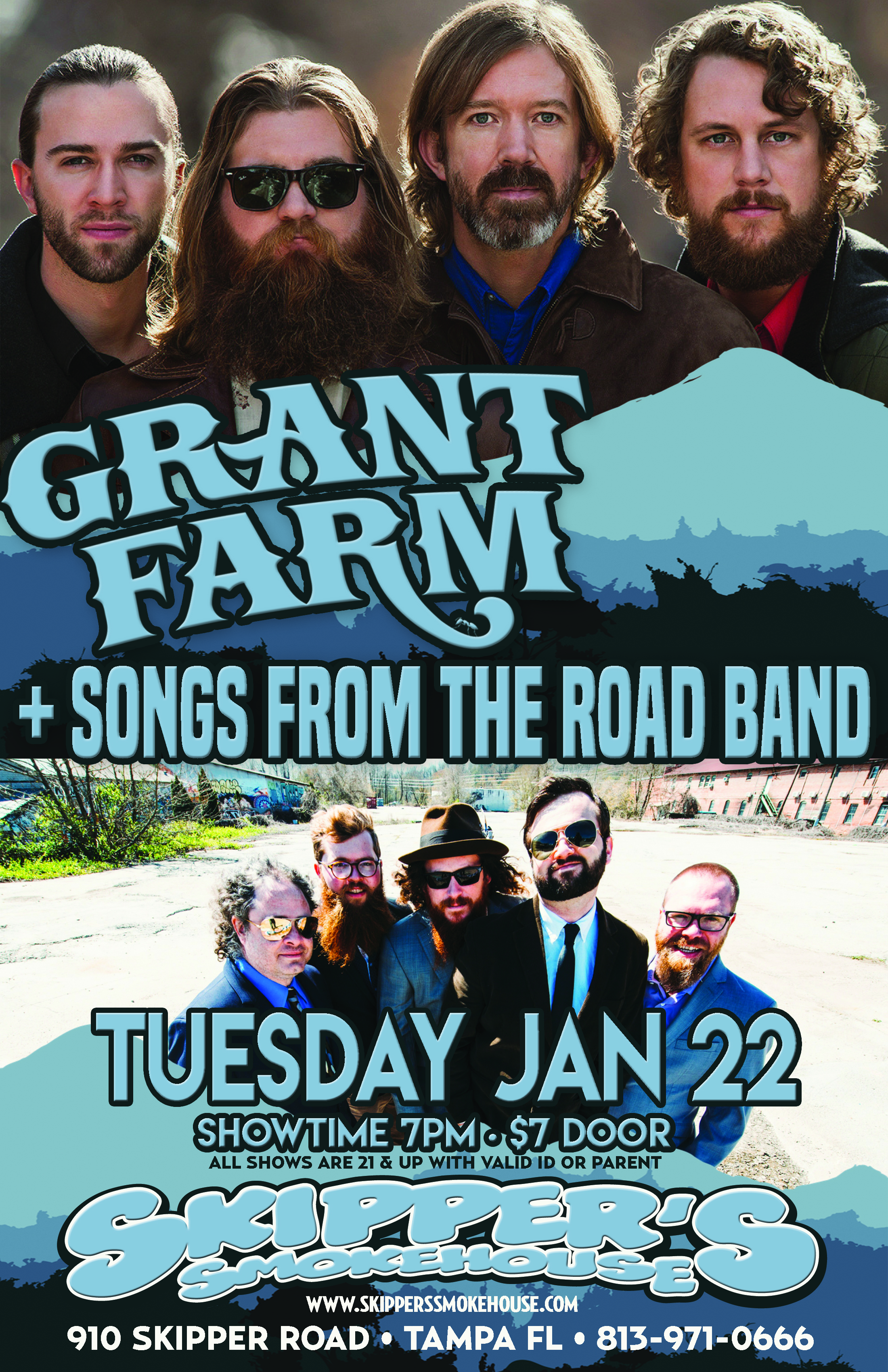 Grant Farm Boulder, Colorado-based Cosmic Americana band Grant Farm has entertained a growing fan base on the nation’s club and festival scene since its founding in 2009 by vocalist and National Flatpicking Guitar Champion Tyler Grant.

Built on the fundamentals of love, family, and music, the band is a sure bet for fans of high-energy, authentic artists as diverse as Sturgill Simpson, Tedeschi Trucks Band and Phish. Comprised of zany, creative and highly musical comrades, Grant Farm members include Grant (aka “The Champ”), Adrian “Ace” Engfer (bass and vocals), Sean “Magic” Macaulay (drums) and Kevin “Money” McHugh (keyboards and vocals).

Daniel Mescher of Colorado Public Radio dubbed Grant Farm “some of the ablest musicians not only in the state of Colorado, but in the nation.” Members’ prior experience includes playing with groups like The Emmitt-Nershi Band, Donovan Frankenreiter and Hot Soup. Collectively, they had also shared stages with notable artists Sam Bush, Jerry Douglas, Tim O’Brien, Tony Rice, Keller Williams, Jon Oates and the like and with notable groups The String Cheese Incident, Greensky Bluegrass, Yonder Mountain String Band and The Infamous Stringdusters.

The band’s latest release, Kiss the Ground (Summer 2016), represents its first full-length concept album and its third album of original music. Speaking to the struggles we all face as working people, Kiss the Ground sends a positive message while acknowledging real hardship in a society that expects far too much. “We think of this as our ode to the working people,” says Grant, whose song, “Get in Line,” discusses the high price we pay for things we want in life. Kiss the Ground explores real and mythological connections to the human struggle and pays homage to the “Working Class Hero,” an archetype famously described by John Lennon.
Previous Grant Farm albums include a 2012 self-titled debut and a 2014 follow up, Plowin’ Time, which reached #2 on JamBand Radio Charts and charted on Americana Radio. In 2014, the band also released the Meeting on the Mountain EP, an inspired collaboration with the group Fruition.

The band has also created the acclaimed Meeting on the Mountain LIVE, a collaborative, live webcast concert experience featuring Grant Farm as the house band and Tyler Grant as host. To date, episodes have featured Dave Bruzza of Greensky Bluegrass, Bill Nershi of String Cheese Incident, Todd Sheaffer of Railroad Earth, The Dead Winter Carpenters and other guests.

Like a “traveling Gypsy family,” Grant Farm enjoys their life of touring, writing and adventuring together as they share their music up and down the North American roots music line. https://www.grantfarm.net

+ Songs From The Road Band Songs From The Road Band is Charles Humphrey III (bass), Ryan Cavenaugh (banjo), Mark Schimick (mandolin), Sam Wharton (guitar), and James Schlender (fiddle).  These veteran acoustic musicians have collectively received top accolades in the bluegrass, Americana, and jazz genres. Once primarily an album recording band, Songs From The Road Band has emerged as one of the heaviest touring bands in the country since March 2018.  They are currently touring in support of their number one Americana, Bluegrass, and Classic Country chart-topping album Road To Nowhere. They are proud to call both Asheville, NC and Nashville, TN home.

Cavanaugh has made his long-awaited return to bluegrass after 10 years touring the world with some of the best living jazz players. He is an acoustic pioneer on the five-string banjo and is considered one of the best banjo players in the world.  Humphrey, a member of the NC Music Hall of Fame and a Grammy-winning songwriter and producer, received the International Bluegrass Music Association’s entertainer of the year award in 2011. Schimick’s signature high harmonies and energetic mandolin licks have pushed him to the top of the progressive and jamgrass scene alongside legends Larry Keel, Vassar Clements, and Tony Rice.  Wharton is an award-winning singer and guitar picker who honed his chops in Telluride, CO Schlender, a two-time National fiddle award recipient, is one of the top five string fiddlers in the world, with a background in contest, classical, and jazz.

The Road Band delivers a one-of-a-kind show, featuring original songs from their four studio albums and crowd favorites from all musical genres.  The band is known for their improvisational jams and light show, providing an engaging, high-energy experience for audiences around the country. http://www.songsfromtheroadband.com