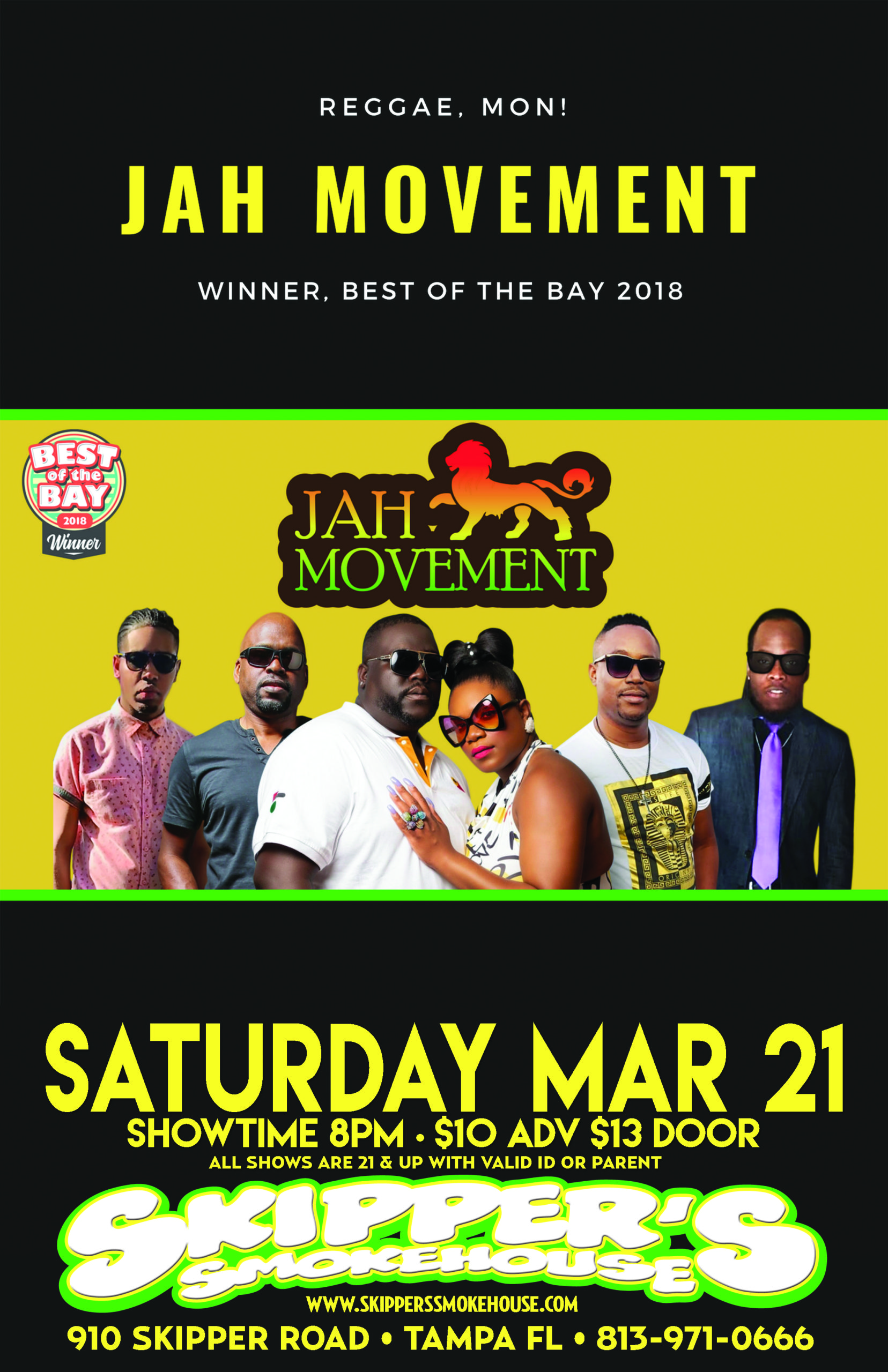 As of today, March 17, 2020, Skipper’s Smokehouse is postponing all concerts at our venue through April 15, 2020. We are following the recommended CDC and government recommendations to make informed decisions to do our part to help participate in keeping our society safe. This is a tough time for all of us – our musicians and hospitality industry staff are suffering in a very large way as it relates to the battle against COVID-19/coronavirus.

We are terribly sorry for any inconvenience and look forward to rescheduling these cancelled shows in the future.

Thank you so much for your support while we are all navigating these uncharted waters in our country – we would also appreciate you keeping us in mind for take out orders. We have folks standing by to take your order.

Please do your part to keep you, your family and your fellow Americans as safe as possible.

Jah Movement
Since the launch of the Reggae band Jah Movement in May 2015, they took over the Florida Circuit in less than a year and won the hearts of many fans young and old. Some of their accolades include being a winner of Creative Loafing’s 2018, & 2016 Best Reggae Band in the Florida Tampa Bay Area, Runner-Up of Creative Loafing’s of 2017 Best Reggae Band in the Florida Tampa Bay Area, in 2016 and 2017 2nd place winners of Sarasota Herald-Tribunes Best Local Entertainment. Jah Movement is made up of some of the best musicians in the South West Florida Region. Jah Movement) has a glorifying sound where the individual talents of each member come together and add their style of talent to music.
Damie Caines former lead vocalist of popular band ‘Democracy’ provides his unique sounds that many local reggae artists can’t touch. Shantel Norman who is one of the most popular female vocalists in Southwest Florida can sing ANY genre of music and leave people with their mouths wide open. She has won many awards because of her talents.
Founded in May of 2015, JMRB has established a well-known name and reputation throughout Florida. Their passion for performing live for different audiences of different ages, the band comes equipped with not only the BEST LIVE Reggae music but adding their own touch of R&B, Soul and Funk music. You never know what popular songs they will pull out the box at each show!
JMRB now has their first début EP album called ‘The Movement’ which was released on their one-year anniversary date in May 2016. Selling out their first album ‘The Movement’ with over 500 copies the night of their album release party. JMRB has had the opportunity to open for many popular reggae artists like Ky-Mani Marley, Inner Circle, Black Uhuru. They plan to start a mini U.S tour very soon. https://www.facebook.com/jahmovementband/
+ Google Calendar+ iCal Export