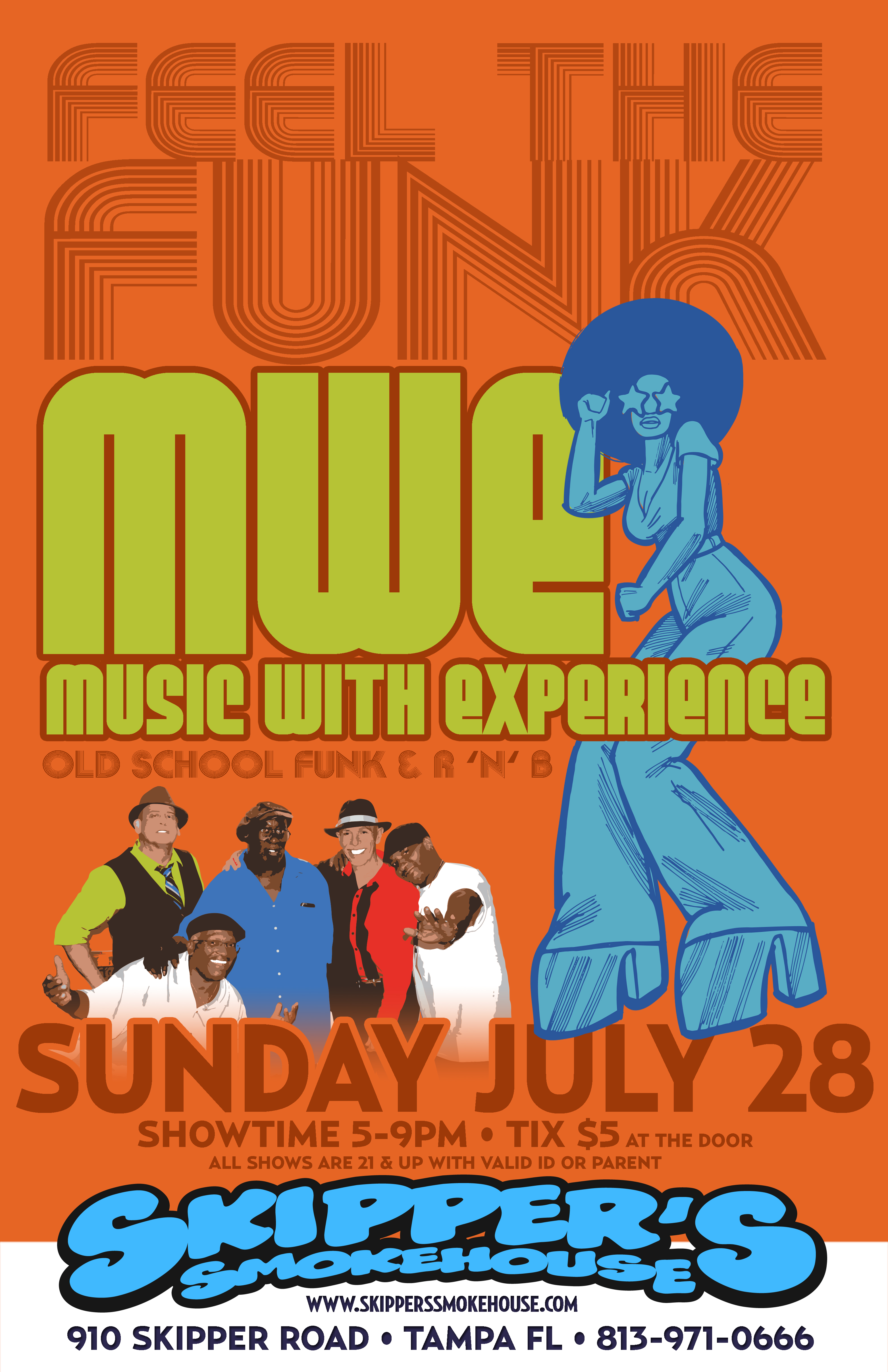 MWE (that’s shorthand for “Music With Experience,” y’all) is a Tampa Bay-based quintet specializing in the kind of old school funk and R’n’B packed dance floors and jumped off of turntables back in the day. With added flavors of rock, reggae, and New Orleans second line groove, this group of established pros quickly gets a crowd on their feet and keeps them there until the house lights come on.

MWE keyboardist and patriarch Delbert Payne is a seasoned musician out of Columbus, Ohio, now residing in Tampa. He began playing piano, sax, and singing at a very early age, leading a slew local bands in his hometown prior to joining The Crowd Pleasers in 1975, signed not long thereafter to Westbound/Atlantic Records. The band’s the hit single “Freaky People” entered the Billboard R&B chart at 88 with a bullet; The Crowd Pleasers subsequently toured through the US and Canada, playing nightclubs and universities to great acclaim. Payne then met the late Junie Morrison of Ohio Players and Parliament-Funkadelic fame, recording two albums with him. Over the decades, Payne has shared the stage foundational acts of likes of Earth Wind & Fire, George Clinton and P-Funk, Frankie Beverly, and Maze.

Bassist Kenny Green is a favored veteran of the Tampa Bay music scene, cutting his teeth with regional bands like Motherwit and Grin beginning in the early ’90s before hatching the Bird Street Players in 2002. Green has performed and recorded with top tier New Orleans acts Big Sam’s Funky Nation and The New Orleans Underdawgs. Green cofounded The Cigar City Rollers which eventually morphed over time into MWE.

Drummer Sergé Chaloff McCoy (named after the great jazz baritone saxophonist of the late 1950s) began playing the drums at the early age of three in his hometown of Huntington, West Virginia and hasn’t set down his sticks since. In the mid-to-late ‘80s, McCoy was immersed full-time in Washington DC’s thriving show band scene. Subsequently, he relocated to California for an extended period, amassing an enviable resume of live and studio work with a dazzling array of bands and styles ranging from straight-ahead jazz to high-powered funk-rock. Now residing in Tampa Bay, McCoy brings scintillating energy and a world-class command of musical styles including jazz, funk, blues, rock, reggae, soca and country music to MWE.

A native of Syracuse, NY, saxophonist/trumpeter/trombonist/percussionist Vincent Barone was raised in on an Air Force base when he began playing trombone and baritone sax. Strongly influenced by both Latin and big band music via his family, Barone has performed in horn sections and Latin percussion for numerous bands since the late 1970s, citing Latin composers such as Eddy Palmieri, Willie Rosario, and El Gran Combo of Puerto Rico as musical mentors.

The newest recruit to the MWE funk army is guitarist Mark Warren, a veteran of Tampa Bay’s original music scene since in the late ’80s with stints in fondly remembered groups such as Mod-L Citizen, Leonard Croon Band, and Barely Pink; the latter quartet released two internationally-distributed albums on JVC/Victor. In more recent times, Warren has been busy with “power lounge” legends the Vodkanauts (established 2002, currently on an open-ended hiatus) and classic country quintet The Sara Rose Band. With those two bands and a number of one-off ensembles, Warren has performed at dozens of concerts for WMNF 88.5 Community Radio honoring artists such as David Bowie, Pink Floyd, The Beatles, and The Who. The Florida-native is a ongoing member of the creative ensemble for Jobsite Theater, the resident theater company at the Straz Center For The Performing Arts in Tampa, performing in the pit band for a number of productions including Hedwig and the Angry Inch and The Threepenny Opera. Warren and Green first crossed paths in the mid-‘90s while playing in proto-jamband Motherwit.