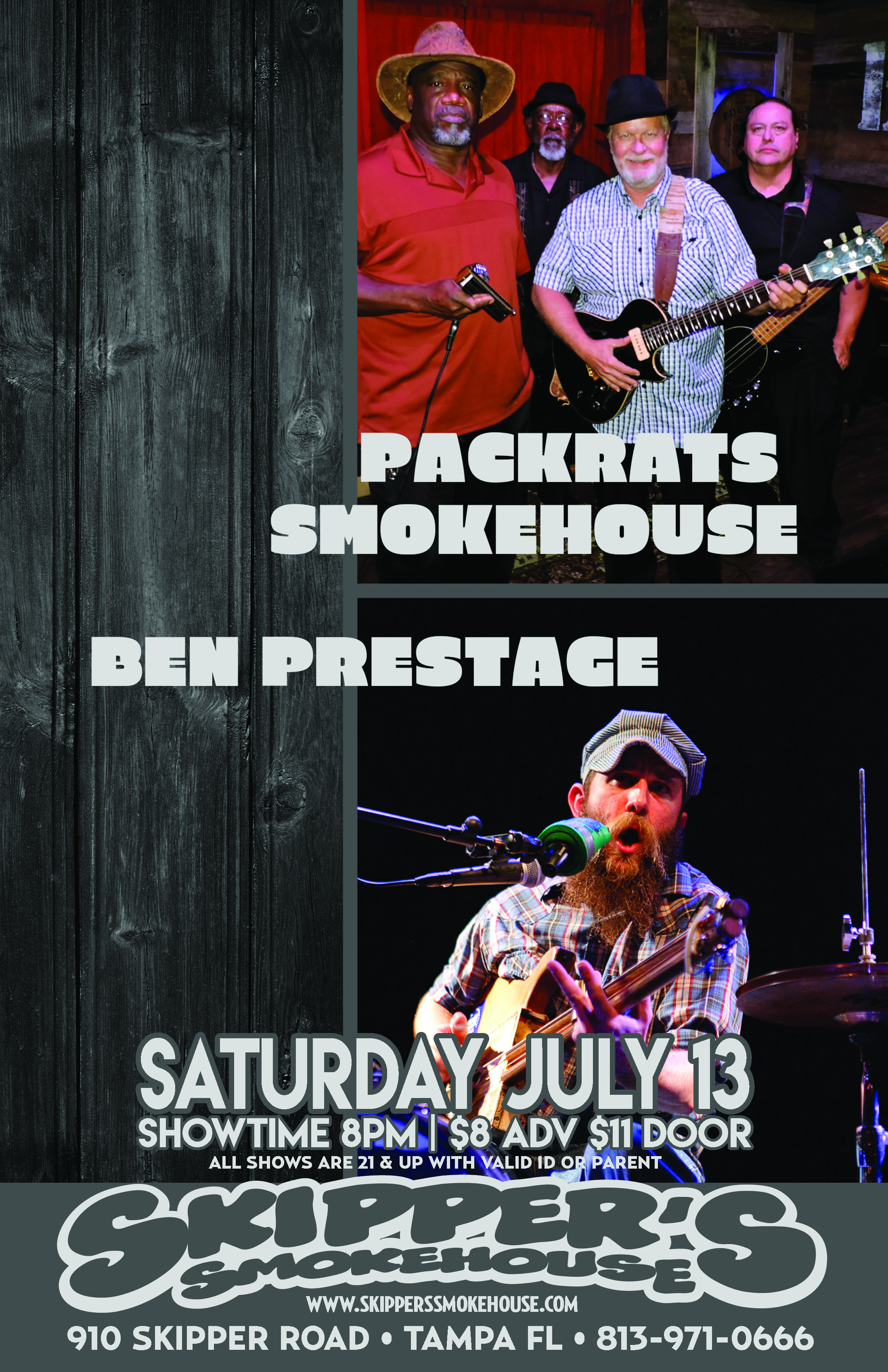 Florida Swamp Blues…. that’s the music of Smokehouse.  Smokehouse Thompson is a raw, greasy harmonica player, evoking the swamp sounds of Baton Rouge that has spread and taken root in the steamy Florida lowlands. The lowdown guitar sound of Guitarist Robert Thomas who is equally impressive, can spit out fiery solos and muscular riffs reworking the deep, swampy groove of New Orleans and Delta blues, that make you think of the pine flatwoods and cypress bottoms of Central Florida.   Top is from New Smyrna Beach and Packrat is from Lake Helen Florida. Although they have shared bandstands since the late 1970’s, It wasn’t until 1988 that they began to explore their common roots and their love of the Blues. In 2015 the band reunited and is now in the process of creating a much anticipated fifth album release in 2017.

Ben Prestage https://www.facebook.com/benprestagemusic/ Ben Prestage’s musical background began before he was born… even before his parents were born. Ben’s great-grandmother was a Vaudeville musican who toured with Al Jolson and also participated in medicine shows. Her daughter was a Boogie-Woogie pianist and painter who used to play for Ben when he was coming up. On the other side of the family tree, his grandfather, who was a Mississippi sharecropper turned Ben onto the sounds and culture of Mississippi and Blues in general.

“When my father was growing up in Mississippi,” states Ben, “ they never had running water and the only electricity was one light bulb that hung from the ceiling, but they had it better than some of their neighbors, because they didn’t have dirt floors. I grew up in rural Florida, on a 14-mile-long dirt road, near the headwaters of the Everglades. It was 7 miles either direction to the nearest paved road, and when you got to pavement, you still weren’t near a town. It was panther, gator, and cottonmouth country. Out there, there was only one kind of music in the house. Whether it was being played on an instrument, or on a recording, it was Blues.

“One day though, in my early teens, I went to help a neighbor build a chicken-coop on his property. When we went inside to eat lunch, I asked him about a banjo I saw in the corner. He picked it up and I heard Bluegrass music for the first time. He was from a musical family and learned old-time banjo from his father from the South Ohio/North Kentucky hills. He lived half a mile away, but it was so quiet out there, you could hear that banjo all the way to my house, if he was on his porch and I was on mine.. He made homemede wine with my dad and when he’d come over, he’d bring his banjo and show me how to pick with my fingers instead of a plectrum.”

Later while living in Memphis, Prestage became a busker (street performer) on historic Beale Street. This is where he perfected his drum-kit. “I played out there a few times with nothing but a guitar and my voice. Once people heard me they liked it, but it was hard to get them on my side of the street with all the other music going on down there. There were some other guys out there who played drums with their feet, and they always got people’s attention. I started playing drums with my feet as an attention grabber but soon found out that the drums played with foot pedals actually enhaced my music dramatically. Not only were people listening and buyin’ discs, they were now dancing and hollerin’ to boot. Now I am to the point where, if you close your eyes, you would think there was a professional drummer with a full-size drumkit behind me. I learned alot from the guys I shared the street with, including John Lowe, (inventor of the Lowebow, a type of diddley-bow that I play), Robert Belfour, and Richard Johnston.”

Ben returned to Memphis over the next few years for the International Blues Challenge (the world’s largest gathering of Blues musicians) and within three consecutive years took he 4th, 3rd, and 2nd place. He is also the only two-time recipient of the Lyon/Pitchford Award for “Best Diddley-Bow Player.” Ben’s interesting approach to instrumentation, (fingerstyle guitar, harmonica, banjo, lap-steel, fiddle, resonator guitar, foot-drums, vocals, and his award-winning original songwriting (recipient of “The Most Unique Performer” at “The Song- writers’ Showcase of America”) has earned him invitations to perform across North America, Europe, and as far as North Africa. All awards aside, he has proven himself, through his live performances, to be the future of American Blues, Roots Music, Americana and is one of today’s most talented outsider.