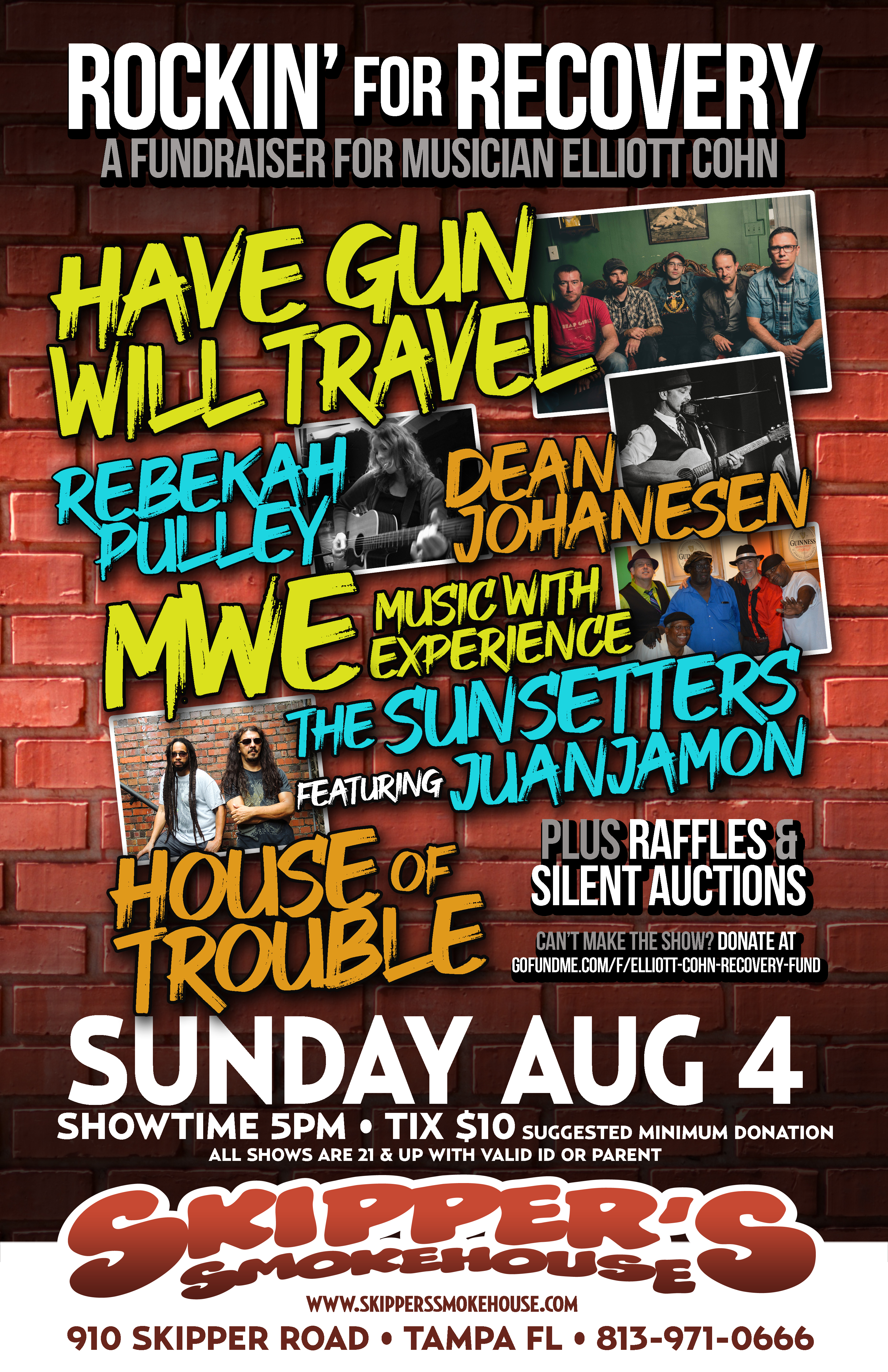 a fundraiser for musician and Tampa native Elliott Cohn

Early exposure to Hendrix on record closely followed by in-person onstage encounters with blues greats the likes of Buddy Guy, Albert Collins, and Big Daddy Kinsey were formative experiences for Tampa native Elliott Cohn, the beneficiary of this benefit concert. Cohn was a frequent performer with a number of area acts on the Skipperdome stage prior to relocating to New Orleans in early 2003 where he helmed his own group, Elliott Cohn’s Cosmic Sweat Society. Rooted in funk, rock, blues, and jazz, this combo quickly caught the attention of fans and fellow musicians, leading Cohn to share the stage and recording studio with Crescent City luminaries such as Galactic, MoFro, The Lee Boys, Papa Mali, Pappa Grows Funk, Col. Bruce, Vince Wellnick, and George Clinton and the P-Funk Allstars.

Now returned to his hometown, Cohn, like many musicians and artists, is facing unplanned medical expenses (preemptive cancer surgery) and the Tampa Bay music community is rallying to his aid.

Can’t make it to the show yet still want to help?

Have Gun Will Travel (Americana)

Florida’s Have Gun, Will Travel return with their first new album in four years. Strange Chemistry is the sound of a band with a renewed sense of purpose and direction. Following in the footsteps of fellow Florida rockers Tom Petty & The Heartbreakers, while simultaneously paying tribute to their early indie-rock influences, HGWT set out to make the quintessential American rock album. Singer-guitarist Matt Burke and fellow bandmates; brother and bassist Daniel Burke, guitarist Scott Anderson, drummer JP Beaubien, and keyboardist Edward Stork; along with help on several songs from good friend Garrett Klahn (Texas Is The Reason), deliver their most personal and emotionally resonant album to date.

“Their music has a great energy to it with infectious, sing-along choruses and refrains” said NPR’s Robin Hilton. American Songwriter Magazine referred to HGWT as “organic, infectious Americana Pop.” HGWT’s music has been featured in a number of film and TV productions; including the Netflix series The Ranch, CBS’s The Good Wife, Travel Channel’s Expedition Unknown and the PBS series Roadtrip Nation, as well as a national Chevy TV commercial campaign and more. The band has toured extensively throughout the US, playing many of the major music festivals and conferences. Their live performances have been described as rousing, rollicking, energetic and dynamic. “Burke & Co. have what it takes to win over any crowd.” – Suburban Apologist

Rebekah Pulley is a St. Petersburg, FL-based, nationally-lauded singer-songwriter and performer gifted with a seasoned sultry voice embed with a tendency to break the listener’s heart and shake their soul. Her songwriting, live performances, and recordings encompass roots-rock, blues, old-school country & western, jazz, and even gospel, earning her seven ‘Best Of The Bay’ awards from Tampa Bay’s own Creative Loafing.

Originally from New York, accomplished singer/songwriter/guitarist Dean Johanesen has made his home in many parts of the US including, Indiana, Nevada, Georgia and Florida. Johanesen’s mother delivered motor homes when he was young and the family traveled around listening to many different artists and kinds of music. Led Zeppelin to Simon and Garfunkel, classic country to musical soundtracks provided the soundtrack to his youth and his diversity of influences had an effect on Johanesen’s interests musically as well as giving him a feel for the road.

In 2013, Johanesen released his first solo record with intentions of getting back to the importance of the storyteller songwriting format while a recent passion for gypsy jazz music in the vein of Django Reinhardt has put Johanesen on a musical path with a focus on new stories of old times. Non fictional characters from the ’20s and ’30s, circus performers, the side show, Prohibition, the war of currents all placed in a backdrop of gypsy swing.

Tampa Bay-based quintet specializing in the kind of old school funk and R’n’B packed dance floors and jumped off of turntables back in the day. With added flavors of rock, reggae, and New Orleans second line groove, this group of established area pros quickly gets a crowd on their feet and keeps them there until the house lights come on.

Calling their sound “twilight music,” alluding to the magical time when day and night meet, singer/drummer Derrick McDonald and guitarist Jose Pasquini are known collectively at The Sunsetters. Together, they fuse seemingly disparate musical influences ranging from Reggae and R&B to jazz and rock into a soothing union. They’ll be doing at this performance by renowned saxman-about-town Juanjamon.

Led by Hammond B-3 maestro Dean Germaine, this collective of Tampa Bay music vets (including bass legend Ben Sudano) has hosted the legendary Green Iguana West Shore blues jam for more than a decade. They’ll get your mojo workin’ in a heartbeat