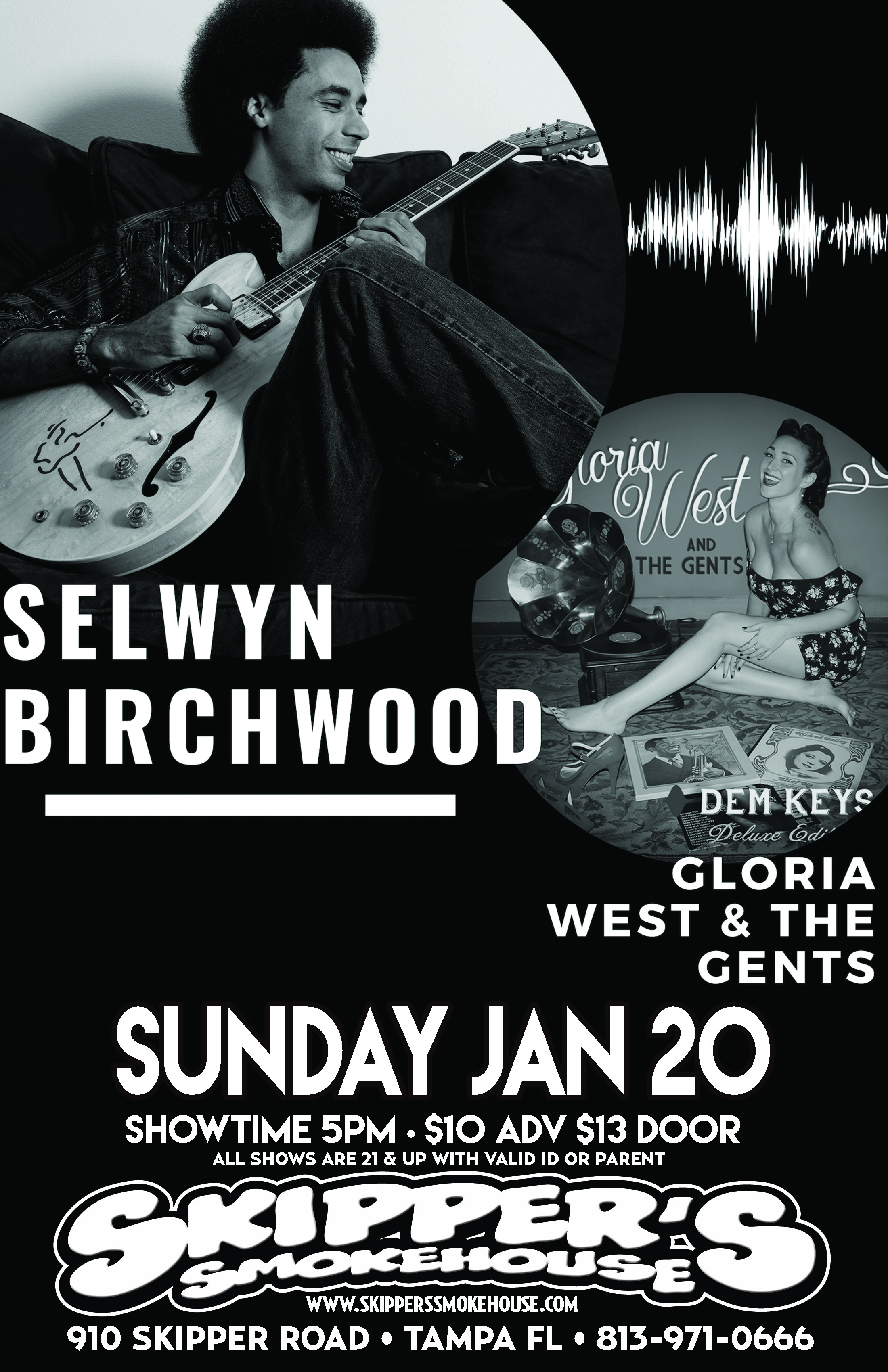 With his fiery guitar and lap steel playing, his trailblazing, instantly memorable songs and gritty, unvarnished vocals, Selwyn Birchwood is among the most extraordinary young stars in the blues. His deep familiarity with blues tradition allows him to bust the genre wide open, adding new sounds, colors and textures, all delivered with a revival tent preacher’s fervor and a natural storyteller’s charisma. Since the 2014 release of his Alligator Records debut, Don’t Call No Ambulance, Birchwood’s meteoric rise from playing small Florida clubs to headlining international festival stages is nothing short of phenomenal, as he continues to set the contemporary blues world on fire. The album received the Blues Music Award and Living BluesCritics’ Award for Best Debut Album Of 2014, and he won the 2015 Blues BlastRising Star Award. Selwyn and his band have crisscrossed the U.S. and Europe repeatedly, delivering unforgettable live performances. With his new album, Pick Your Poison, Birchwood, along with his band—saxophonist Regi Oliver, bassist Huff Wright and drummer Courtney “Big Love” Girlie—takes a major step forward, crafting visionary blues for a new generation of forward-looking fans.

Birchwood, who attacks his guitar and lap steel with searing intensity, wrote and produced all 13 songs onPick Your Poison. His richly detailed, hard-hitting originals run the emotional gamut from the humorously personal My Whiskey Loves My Exto the gospel-inflected Even The Saved Need Savingto the hard truths of the topical Corporate Droneand Police Stateto the existential choice of the title track. The cutting-edge songs are made all the more impactful by Birchwood’s gruff vocals, his untamed musicianship and his band’s seemingly telepathic accompaniment. “I write and sing what I know,” says Birchwood, whose innovations are as expansive as his influences. “This album has a broad reach. It’s for young, old and everyone in between.”

According to Alligator Records president Bruce Iglauer, who signed Birchwood to the label shortly after the bluesman won the 2013 International Blues Challenge and also the Albert King Guitarist Of The Year Award at the same event, “Selwyn writes smart, infectious, fresh songs and delivers them with a warm, conversational vocal style and a fun-loving attitude. He’s a killer guitarist, switching between a regular six-string and lap steel. Live, he’s a ball of energy, interacting with the audience like they were in his living room.”

Birchwood’s high-octane blues—at once deeply rooted, funky and up-to-the-minute—are played with passion and honest emotion. With his band feeding off his drive and exuberance, the striking 6’3” young man with his trademark Afro roams the stage (often barefoot), ripping out memorable guitar licks with ease, his soulful, rocks-and-gravel vocals firing up the crowd. His ability to win over an audience—any audience—is proven night after night on the bandstand. With his warm, magnetic personality, Birchwood is as down-to-earth as his music is fun, thought-provoking and vital. His mission is to spread his music far and wide, to share his joy, to play his heart out, and to push the blues into the future. “There’s nothing I’d rather be doing than playing the blues,” he says. “And I try to convey that with every song and with every performance.”

Birchwood, his father from Tobago, his mother from the UK, was born in 1985 in Orlando, Florida. He first grabbed a guitar at age 13 and soon became proficient at mimicking what he heard on the radio. But the popular grunge rock, hip-hop and metal of the 1990s didn’t move him, and he quickly grew bored. And then he heard Jimi Hendrix. “He was larger than life. What he did was mind-blowing. When I realized Hendrix was influenced by the blues, I found my path,” he says. By 17, he was deep into the blues, listening to Albert King, Freddie King, Albert Collins, Muddy Waters, Lightnin’ Hopkins and especially Buddy Guy. As luck would have it, just as Birchwood was discovering Guy, the blues master had a concert scheduled in Orlando. Birchwood was there, front and center. “I was floored,” he recalls. “I completely connected with the blues. I knew I had to make this music.”

As Selwyn’s guitar proficiency grew, a friend told him that his neighbor was a blues guitarist and had a band. The 19-year-old Selwyn went over to check it out and jam. The guitar-playing neighbor turned out to be the Texas-born blues legend Sonny Rhodes, who was instantly impressed with the enthusiastic young guitar slinger. Within one month’s time, Rhodes asked Birchwood to pack his bags and join him on the road. It was an incredible experience for Birchwood, as Rhodes took the young man under his wing, teaching him not only guitar and lap steel, but also how to conduct business, how to run a band, and how to reach an audience. “Sonny always said, ‘Play what’s in your heart.’ I’ve never lost sight of that,” says Birchwood.

Rhodes insisted Birchwood go to college and always held the guitar spot in his band open for Selwyn whenever he was available. It was a win-win situation, as Birchwood—through hard work and scholarships—received his MBA from The University of Tampa. “I challenged myself to get that degree,” Birchwood says. “These days, it’s not good enough to just be a good player.” Combining the musical lessons learned from Rhodes and his business acumen, Birchwood created The Selwyn Birchwood Band in 2010, featuring veteran musicians older than Selwyn, testifying to Selwyn’s musical chops and his leadership skills. On stage, they play off each other with ease, feeding off each other’s  energy, sharing the fun with the audience.

In 2011 the self-released FL Boyhelped the band land gigs outside of their Tampa base, where they were becoming local heroes. Birchwood and his band won their way to spots at the 2012 and 2013 International Blues Challenges in Memphis. After taking ninth place in 2012, they came back determined the next year, taking first place. Alligator Records president Bruce Iglauer was sitting at the judges’ table at the time. “I saw Selwyn’s potential in 2012. He absolutely deserved to win in 2013,” he says. The victory opened more doors for Birchwood, increased his exposure and helped the band land a deal with Intrepid Artists booking agency, which led to more and better gigs.

With his 2014 Alligator Records debut album,Don’t Call No Ambulance,Selwyn Birchwood announced his arrival on the international blues stage. The album is a fully realized vision of contemporary blues. Between his uninhibited sense of fun and adventure and his serious-as-a-heart-attack musicianship, Don’t Call No Ambulanceopened a door into a bright future for the blues. Rave reviews ran in publications from Rolling Stoneto The Wall Street Journal, from The Chicago Tribuneto The San Francisco Chronicle.

Birchwood has opened for major blues stars including Robert Cray and Buddy Guy and has shared the stage with another friend and teacher, Joe Louis Walker. Not long ago, Selwyn had the opportunity, when performing in San Francisco, to bring his friend and mentor Sonny Rhodes on stage to sit in with his band. It was a moment Birchwood will never forget. “He did so much for me; it was a real honor to return the favor.”

With Pick Your Poison’s urgent, uncompromising music, Selwyn Birchwood is forging new directions for the blues.The Washington Post calls him a “tough, indelibly modern next generation bluesman.” The Wall Street Journalsays he is “fiery and original.” The hard-hitting, cutting-edge songs on Pick Your Poison, along with his incendiary live performances, prove without a doubt his status as the blues’ most sensational young talent.

w/ Gloria West & the Gents Gloria West and The Gents bring old school stride-swing jazz with a sultry twist to stages across Tampa Bay, including Clearwater Jazz Holiday, The St. Pete Coliseum, and Tampa Theatre. From classic mid-tempo swing-dancing numbers to sultry torch songs on the edge of the blues, their fast-paced high-energy and her ‘killer vocals’ are guaranteed to get anyone’s foot tapping. Creative Loafing says about West, “One of the most dynamic voices working in the [Tampa] Bay area.” The acclaimed group has been performing throughout the Tampa Bay area since 2014 and have been described as “pure, tight, sensual artistry”. Gloria West & The Gents perform “stunning originals” with Ms. West delivering a “star-powered voice” with “vocals reminiscent of Lady Day”. They deliver originals, pop covers, favorites from the 20’s, 30’s, and 40’s, and even old-time movie classics and Disney songs, all with an old jazz feel. Gloria West has been compared to Norah Jones and Billie Holiday with the lighthearted fun of “Mrs. Swing” Mildred Bailey added in. Louis Armstrong’s vocal tone is brought to life by the band’s pianist Anthony Castellano, whose performance speaks for itself. Her mission is to create and share#JazzForTheMassesand to spread her love of jazz to everyone, making it#TheJazzHeardRoundTheWorld. That includes introducing brand new audiences to jazz who have little knowledge of it, and even bringing others around that don’t know about it’s amazing roots and thought they didn’t like the genre. West says: “I want to create jazz in an accessible way where everyone can understand and appreciate its broad appeal. Gloria West & The Gents released their first album “Dem Keys” on CD in 2017 to rave local reviews and are releasing a deluxe edition with three bonus songs in December 2018 on digital download as well as our Collector’s Edition Red Vinyl Record. The project was fully fan-funded locally and is comprised of original songs as well as old jazz and pop covers with their distinct vintage spin.