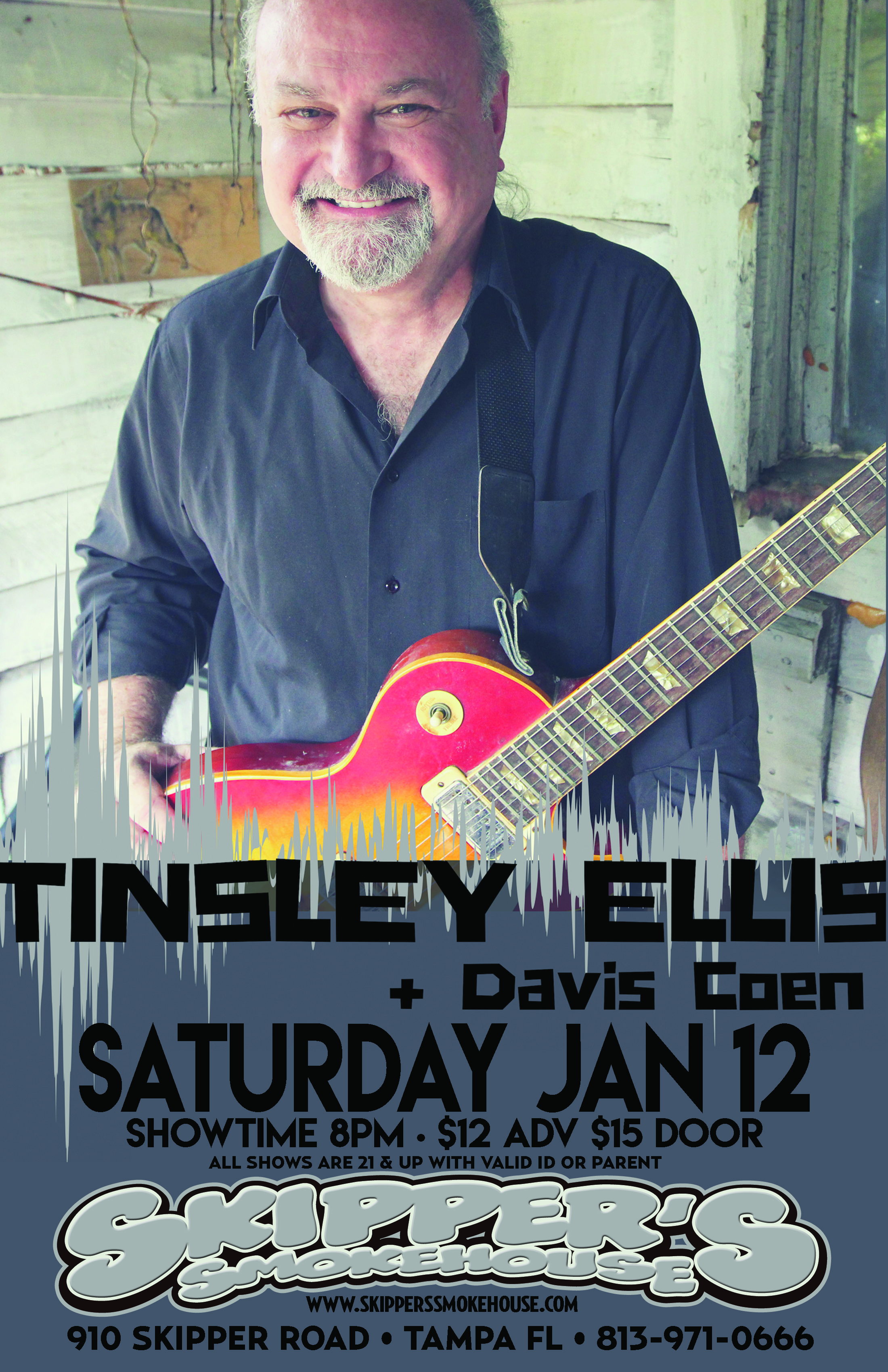 Tinsley Ellis Since his Alligator debut 30 years ago, Southern blues-rock guitar wizard, vocalist and songwriter Tinsley Ellis has become a bona fide worldwide guitar hero. The Chicago Sun-Times says, “It’s hard to overstate the raw power of his music.” Now, he makes his triumphant return to Alligator Records with a powerful new album, Winning Hand. Armed with his signature molten licks, melodic riffs and rousing, intense solos, Ellis, as his legions of fans will attest, is among the blues world’s best-loved, hardest working and most well-travelled statesmen. He has performed in all 50 United States as well as in Canada, Western and Eastern Europe, Australia and South America, earning legions of fans with his guitar virtuosity, passionate vocals and memorable original songs. Ellis is also revered as a guitarist’s guitarist, with famous friends including Derek Trucks, Warren Haynes, Oliver Wood, Jonny Lang and members of Widespread Panic calling on him to sit in and jam. “A musician never got famous staying home,” he says.

Recorded in Nashville and produced by Ellis and keyboardist Kevin McKendree, the ten brilliantly performed, fervently sung tracks on Winning Handinclude nine originals, ranging from blistering blues to heart-pounding rock to soulful ballads. As his only cover song, Ellis pays tribute to his greatest guitar-playing and songwriting influences with a Freddie King-inspired version of rock legend Leon Russell’s “Dixie Lullaby.” “Guitar, guitar, guitar is what this album is all about,” says Ellis, who recorded primarily with his 1959 Fender Stratocaster, his 1967 Gibson ES 345 and his 1973 Les Paul Deluxe. Guitar World says, “Ellis’ playing sparkles with depth and subtlety. Whether playing deep, slow blues or uptempo rockers, Ellis rides a gorgeously fat, pure tone.”

Born in Atlanta in 1957, Ellis was raised in southern Florida. He discovered the blues through the back door of British Invasion bands like The Yardbirds, The Animals, Cream and The Rolling Stones as well as Southern rockers like The Allman Brothers. One night he and a friend were listening to records when his friend’s older brother told them if they liked blues, they should really be listening to B.B. King. As luck would have it, King was in town for a week, and the upcoming Saturday afternoon show was just for teenagers.

Tinsley and his friend went, sitting transfixed in the front row. When B.B. broke a string on Lucille, he changed it without missing a beat, and handed the broken string to Ellis. After the show, B.B. came out and talked with fans, mesmerizing Tinsley with his warmth and kindness. Tinsley’s fate was now sealed; he had to become a blues guitarist. He saw Howlin’ Wolf, Muddy Waters and every other blues artist who came through town, always sitting up front, always waiting to meet the artists, take photos, get autographs. And yes, he still has B.B.’s string.

Already an accomplished teenaged musician, Ellis left Florida and returned to Atlanta in 1975. He soon joined a gritty local blues band, the Alley Cats. In 1981, along with veteran blues singer and harpist Chicago Bob Nelson, Tinsley formed The Heartfixers, a group that would become Atlanta’s top-drawing blues band. After cutting a few Heartfixers albums for the Landslide label, Ellis was ready to head out on his own.

Georgia Blue, Tinsley’s first Alligator release, hit the unprepared public by surprise in 1988. Critics and fans quickly agreed that a new and original guitar hero had emerged. The Chicago Tribune said, “Tinsley Ellis torches with molten fretwork. Ellis takes classic, Southern blues-rock workouts and jolts them to new life with a torrid ax barrage.” Tinsley’s next four releases—1989’s Fanning The Flames, 1992’s Trouble Time, 1994’s Storm Warning, and 1997’s Fire It Up—further grew his fan base and his fame. Features and reviews ran in Rolling Stone, The Chicago Tribune, The Washington Post, The Los Angeles Times, The Boston Globe, and in many other national and regional publications.

Guests including Peter Buck (R.E.M.), guitarist Derek Trucks (who made his recording debut with Tinsley at age 14) and keyboardist Chuck Leavell (The Rolling Stones) have joined him in the studio. Ellis’ song “A Quitter Never Wins” was recorded by Jonny Lang, selling over a million copies. He in turn has made guest appearances on albums by The Allman Brothers, Gov’t Mule, Colonel Bruce Hampton and others. Producers Eddy Offord (John Lennon, Yoko Ono, Yes) and even the legendary Tom Dowd (The Allman Brothers, Ray Charles) helped Ellis hone his studio sound.

A move to Capricorn Records in 2000 saw Ellis revisiting his Southern roots. In 2002, he joined the Telarc label, producing two well-received albums of soul-drenched blues-rock. He returned to Alligator in 2005, releasing Live-Highwayman, which captured the crowd-pleasing energy of his live shows. He followed it with two more incendiary studio releases, 2007’s Moment Of Truth and 2009’s Speak No Evil. He has since self-released four successful albums on his own Heartfixer label.

Over the course of his career, Ellis has shared stages with Stevie Ray Vaughan, Otis Rush, Willie Dixon, The Allman Brothers, Leon Russell, Son Seals, Koko Taylor, Albert Collins and many others. Whether he’s on stage with his own band or jamming with artists like Buddy Guy, the Tedeschi Trucks Band, Gov’t Mule or Widespread Panic, he always plays with grit, soul and unbridled passion. Back home on Alligator Records with his new album and a massive live tour in the works, Tinsley Ellis is ready to prove again that whenever he picks up a guitar, he’s playing with a winning hand. – Alligator Records http://tinsleyellis.com/index.html

These Things Shall Pass is the tenth full-album release from Memphis-area musician Davis Coen, and fulfills his long-standing goal of recording an entire spiritual-based album. The album nods to a wide range of classic song selections, spanning from time-tested traditional American hymns, such as “What A Friend We Have In Jesus” and “Old Rugged Cross,” to classic gospel radio cuts as Willie Banks and the Messengers’ “Working For Jesus,” and the title cut, Stuart Hamblen’s “These Things Shall Pass,” famously covered by country music legends Hank Snow and Johnny Cash. The album also has six original songs, including light-hearted duets “Saint Christopher” and “Jesus’ Hand,” with former Billy Joe Shaver guitarist Patrick McClary from Jackson, MS vocally accompanying Coen. It was recorded at Sand Dog Studios in Batesville, MS, and co-produced by the album’s drummer Ryan Rogers and Coen.