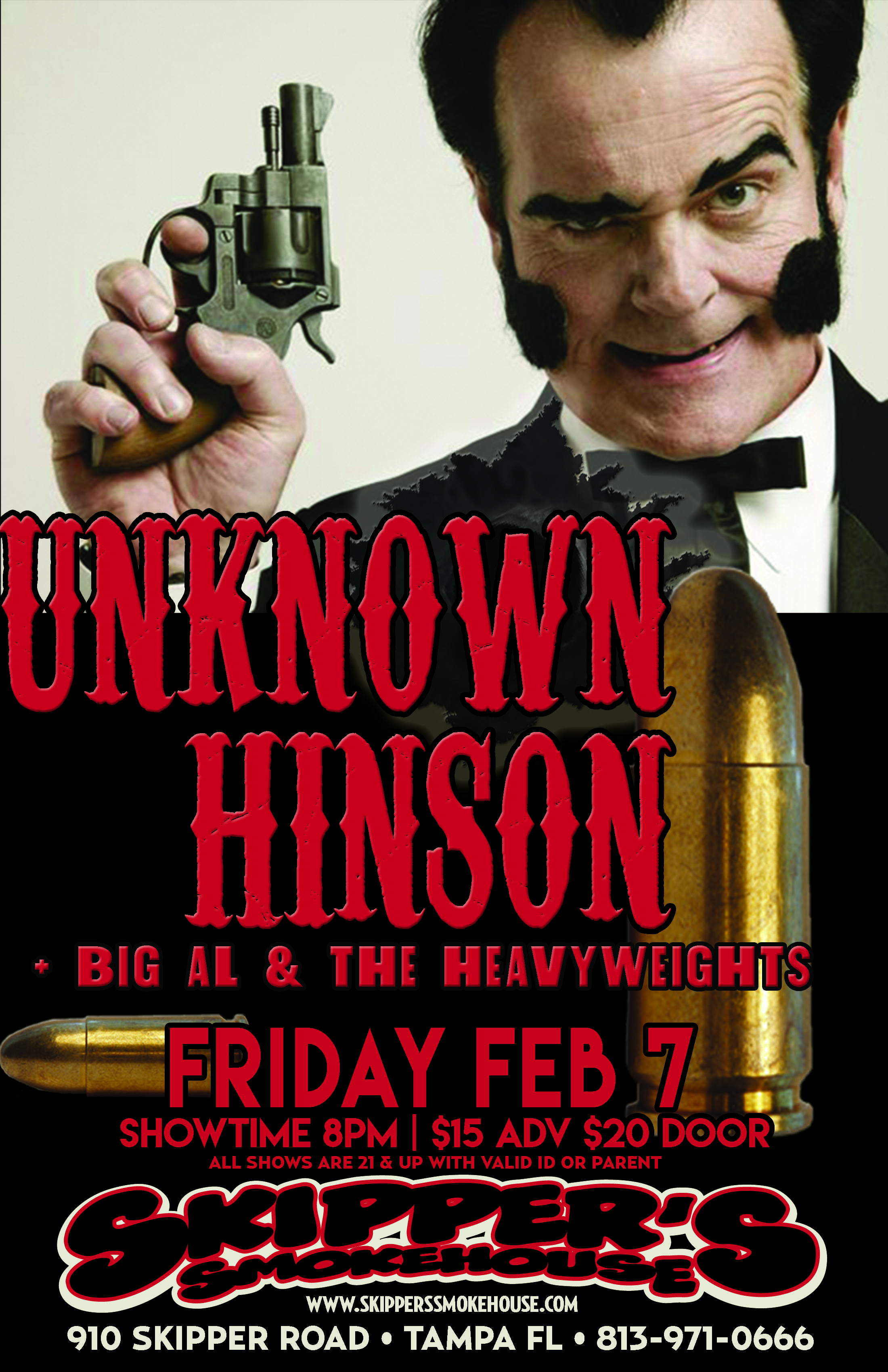 The UNtold Story of Unknown

While singing his own hilariously politically incorrect songs, Unknown Hinson plays guitar in a style incendiary enough to have Satan himself reaching for the antiperspirant. But don’t dismiss him as a novelty act. He’s one hell of a talent and has the music to prove it!

Looking somewhat like Dracula’s nasty little brother who spent some hard years drinking and working as a carnival barker for a second-rate freak show, Unknown Hinson translates that vibe to his style of country and western-tinged psychobilly. The band is now touring nationwide, wowing audiences with outrageous and campy, white-trash persona and freewheeling, sleazy tone.

Hinson’s most recent CD release, “Live and Undead”, melds weepy twang, searing guitar riffs and lyrics that speak of love-gone-bad. Recorded at a sold-out show, an enthusiastic honky tonk crowd sings along with the King on every song. Raucous, theatrical and over-the-top, Unknown Hinson isn’t just for the trailer park set anymore!

Unknown is gaining international notoriety in the 14-34 demographic as the voice of lead character “Early Cuyler” in the popular show from Cartoon Network – “Squidbillies”. The first four seasons were so well-received that an immediate green light was given to future seasons. Check website for dates and time slots.
http://www.adultswim.com/shows/squidbillies/

Unknown Hinson is an international winner in the Independent Music Awards for his alternative Country track “Torture Town” from the album “Target Practice”.
http://www.musiciansatlas.com

Unknown Hinson is also a featured artist for Reverend Guitars, representing them in many issues of Guitar Player magazine. A signature Unknown Hinson guitar is currently part of Reverend’s celebrity instrument lineup. Full page interviews and photos of Unknown are in March and April 2012 issues of Guitar Player, and on guitarplayer.com         www.reverendguitars.com

Upon his first performance at Rockabilly Revival, an annual festival in Austin, Tx, Rockabilly Magazine named Unknown Hinson as their “Find of the Year” www.rockabillymagazine.com

Check out YouTube for thousands of videos from various sources featuring the King of Country Western Troubadours.www.youtube.com/unknownhinson

Live interviews with Unknown Hinson along with his music are broadcast nationally on XM Radio’s National Lampoon channel. (XM 154 along with FM radio partners). http://www.nationallampoonradio.com/

w/ Big Al and the Heavyweights From Cajun to Zydeco to Blues to Rock and everything in between, Big Al & the Heavyweights offer a musical gumbo sure to please all. Formed in 1996 as the Unknown Blues Band , with founding members Big Al Lauro, Warren Haynes ( Allman Bros, Gov’t Mule), Rick Gergen ( Sweethearts of the Rodeo), the band has been featured at festivals and venues throughout the US. http://www.bigal.net