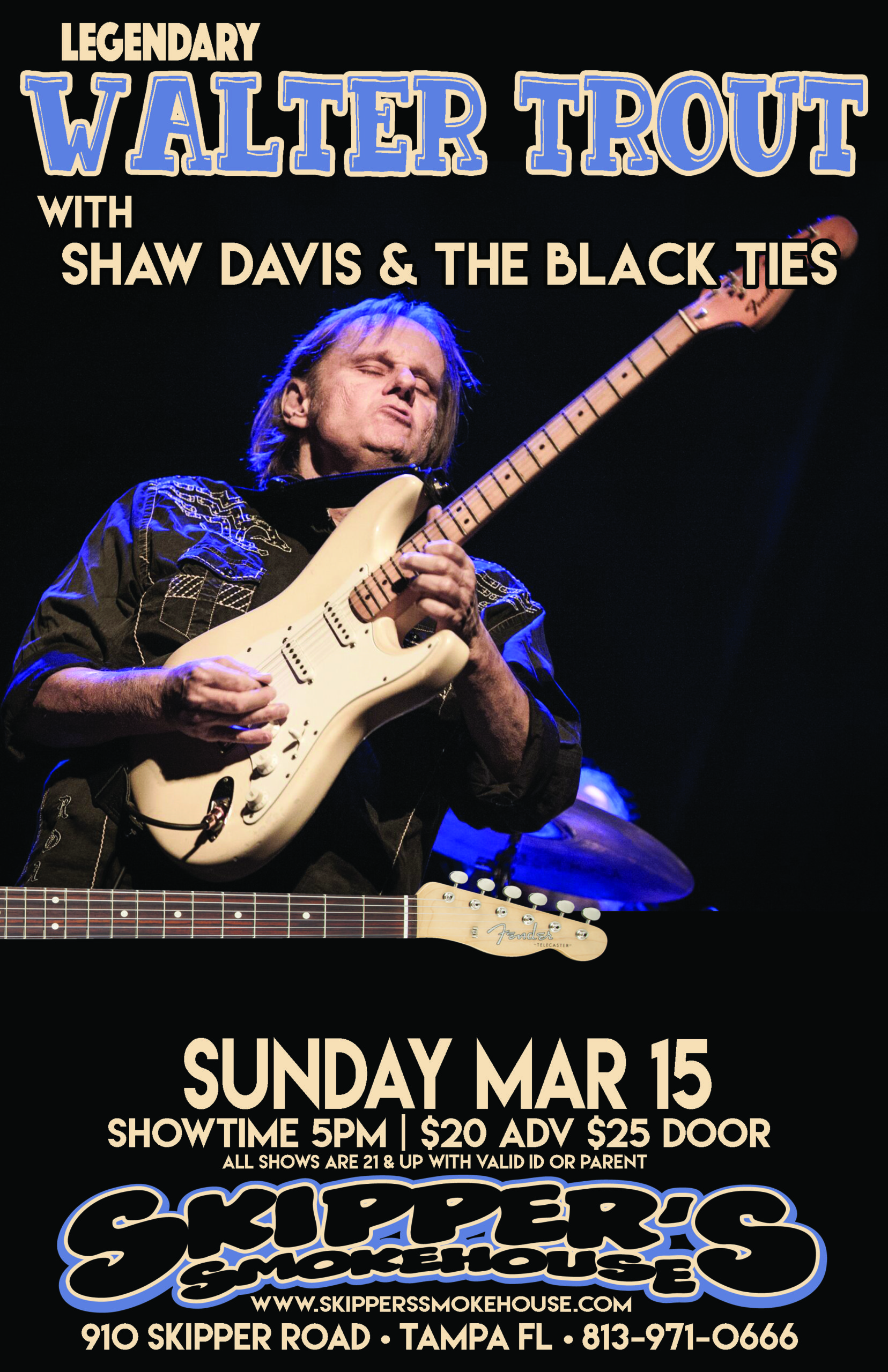 Skipper’s Smokehouse along with Walter Trout announce the cancellation of this weekend’s show – a statement from Walter is below.

Due to cancellations of several shows because of COVD-19 making continued touring unsustainable, and Walter’s concern that bringing people together at a time when social distancing may slow the spread of the virus, Walter and his management have made the difficult decision to postpone the dates on the rest of the March US tour.
On a personal level, Walter also feels it is best to model responsible behavior since he has a compromised immune system after his liver transplant six years ago. Being grateful for the donated liver includes not taking any undue risks that may jeopardize this gift of life he was provided.

This is a very difficult decision and we do not make it easily. We have enormous respect for the promoters and all the people who work at music venues who will suffer along with us financially, and of course for the fans we disappoint.

We hope we all will emerge stronger after this crisis passes.

If you already have tickets, please return to the point of purchase for a refund. Tickets purchased on the web will be refunded automatically and you do not need to take any action – the refunds could take a couple of days to hit your account/card.

As of now, Skipper’s Smokehouse is open our regularly scheduled hours.

We greatly appreciate everyone’s support and understanding while navigating this unknown territory we’re living in.

Walter Trout Walter Trout is the beating heart of the modern blues rock scene, respected by the old guard, revered by the young guns, and adored by the fans who shake his hand after the show each night. After five decades in the game, Trout is a talismanic figure and part of the glue that bonds the blues community together, at a time when the wider world has never been so divided. He’s also the only artist with the vision, talent and star-studded address book to pull off a project on the scale of We’re All In This Together. “It was quite a piece of work to get this record together,” he admits. “But I guess I have a lot of friends, y’know…?” Before you even hear a note, We’re All In This Together has your attention. Drafting fourteen A-list stars – including Joe Bonamassa, Kenny Wayne Shepherd, John Mayall and Randy Bachman– and writing an original song for each, Trout has made the most tantalizing album of the year and found solace after a run of solo albums that chronicled his near-fatal liver disease of 2014. “Now was the right time for this record,” he says. “Battle Scars [2016] was such an intense piece of work, written with tears coming down my face. I needed a break from that, to do something fun and light-hearted. This album was joyous for me.” Scan the credits of We’re All In This Together and you’ll find nods to every twist and turn ofTrout’s electrifying backstory. There’s keys man and long-time friend Skip Edwards, who came up on the same early-’70s New Jersey circuit where Trout cut his teeth as the precocious lead guitarist for Wilmont Mews. There’s organ wizard Deacon Jones, the West Coast bandleader who brought a twenty-something Trout into the orbit of blues titans like John Lee Hooker and Big Mama Thornton. “Deacon sorta discovered me when I moved to LA in the ’70s,” reflects Trout. “So I owe him.” Trout also welcomes a fistful of compadres from recent all-star project Supersonic Blues Machine, in the form of Warren Haynes, Robben Ford and Eric Gales. Then there’s John Mayall: the ageless British blues-boom godfather who hired a troubled Trout for the Bluesbreakers 1985 and now blows harp on “Blues For Jimmy T.” “Am I proud to call myself a former Bluesbreaker?” Trout reflects. “Yeah, of course. What a credential. That is a very exclusive club, and I know that when I’m gone, that’s gonna be one of the big things that they’ll remember me for: that I was a Bluesbreaker for five years.” Since he struck out alone in 1989, Trout’s solo career has been every bit as celebrated. Touring tirelessly and spitting out classic albums that include 1990’s flag-planting Life In The Jungle, 1998’s breakthrough Walter Trout and 2012’s politically barbed Blues For The Modern Daze, he’s won international acclaim and enjoyed ever-growing sales in a notoriously fickle industry. Years on the road have also brought him tight friendships, as evidenced by 2006’s cameo-fuelled Full Circle album and this year’s unofficial sequel, We’re All In This Together. “The new album was originally gonna be called Full Circle Volume 2,” notes Trout, “but I wanted to make the title a positive statement in this time of madness.” In another departure, whereas Full Circle saw each guest visit the studio to track their part, the advance of recording technology in the intervening decade meant Trout’s collaborators on We’re All In This Together were able to supply their contributions from afar. “In the studio, it was the core band of me, Sammy Avila [keys], Mike Leasure [drums] and Johnny Griparic [bass] on every cut, with Eric Corne producing,” he explains, “and then, for most of the tracks, people sent us their parts. But it’s very hard to tell we’re not in the studio together. If you listen to the Warren Haynes track, when we get into that guitar conversation on the end – it sounds like we’re looking each other right in the face, y’know?” They say you can judge a man by the company he keeps. If that’s the case, then We’re All In This Together is further proof of Walter Trout’s position at the hub of the blues scene. This is the sound of an artist not just getting by with a little help from his friends, but positively thriving, on an album that is sure to light another rocket under his blooming late career. “I’m 66 years old,” considers Trout, “but I feel like I’m in the best years of my life right now. I feel better than I have in years physically. I have more energy. I have a whole different appreciation of being alive, of the world, of my family, of my career. I want life to be exciting and celebratory. I want to dig in. I want to grab life by the balls and not let go, y’know…?” https://www.waltertrout.com

w/ Shaw Davis & the Blacktop Shaw Davis is rapidly establishing himself in the realm of Roots & Blues Rock. Born April 4, 1995, the young guitarist has burst his way onto the scene and has already been named one of “50 Modern Blues and Rock Artists In 2019” by Rock and Blues Muse. Shaw Davis & The Black Ties feature an incendiary brand of Hard Blues, Psychedelia, and Roots Rock that continues to resonate with fans and crowds across the country. Backed by drummer, Bobby Van Stone, and bassist, Patrick Stevenson, the power trio has become a mainstay on the national club circuit and have performed with the likes of Foghat, The Guess Who, Blackberry Smoke, Samantha Fish, Chris Duarte, Mike Zito, Albert Castiglia, Walter Trout, Popa Chubby, GE Smith, JP Soars, Anthony Gomes and Eric Tessmer.

Formed in the summer of 2016 out of Pompano Beach, Florida, the bands second album Tales From The West was nominated for three Independent Blues Music awards. Currently, the group is working on their third studio album with producer and former guitarist for Johnny Winter, Paul Nelson at the helm. The album is set to release in the Spring of 2020.

Their self-titled debut album was released on June 14, 2017 to a sold-out release concert at The Funky Biscuit in Boca Raton, Florida and continues to receive steady airplay on blues/rock radio stations in the United States as well as the UK.  The debut album also received an impressive review from Blues Magazine:

“We have a new young guitar hero! Shaw Davis of South Florida. Fierce, raw guitar licks… his guitar tears, barks and bites… We will certainly enjoy this guitarist in the future.”

In January of 2018, the trio released “Alive From Legacy”, a three-track live record intended to capture the energy of the band’s live shows. After its release, the live EP received an excellent review from Rock and Blues Muse:

“Dynamism, precision, and outright fury. It’s like a three-pronged sonic offensive – the guitar pierces, the bass rattles, and the drums batter. For fans of the heavier end of blues rock, it’s a beating your eardrums will gladly take.”

October 20, 2018 brought their sophomore album to life, Tales From The West, with more impressive reviews and airplay while debuting at #20 on the Roots Music Report Blues Rock Chart.

“They’re a three-man wrecking crew that infuse the Blues with Hard Rock muscle to gratifying effect.” -The Rock Doctor

“The hard-charging, rising Blues Rocker leads his trio through a blistering set that shows he never heard of a sophomore jinx. Tipping his hand that he’s charting a course of being a Road Warrior that lights up the night, this hard-hitting set defies fashion and conventional wisdom simply by being incendiary. Hot stuff throughout.”

“The next generation of pure, unadulterated Blues Rock…this is only the beginning for this remarkable trio.” – Rock and Blues Muse