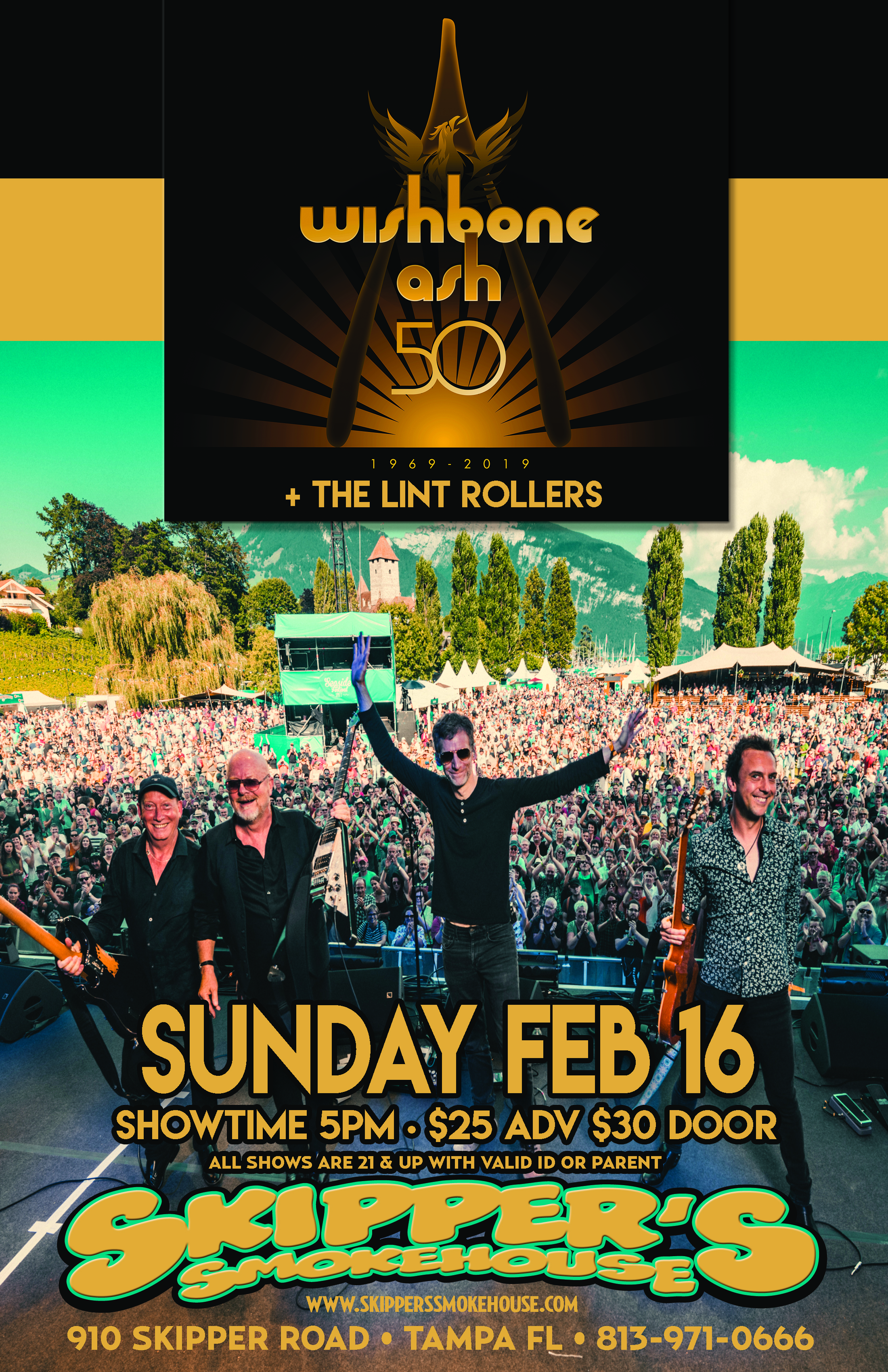 The classic rock bands of the late ’60s and early ’70s enjoy a unique place in popular musical history. The Beatles had gone their separate ways, Britain had already experienced the Blues Boom, and Psychedelia had made its impact. The creative possibilities were infinite. Wishbone Ash embarked on the nascent Progressive Rock scene in 1969, taking full advantage of a fertile musical environment where they produced a distinctive brand of melodic rock. Inspired equally by British folk traditions and American jazz and R&B, the group played to public and critical acclaim. More than 45 years later, having pioneered the use of twin lead guitars, Wishbone Ash has gained worldwide recognition, based firmly on a regime of relentless touring. The band includes founding member Andy Powell, who handles lead vocals and trades licks with Yorkshire’s Mark Abrahams. Bassist Bob Skeat, a 20-year veteran of the band, keeps the bottom rocking with Joe Crabtree, one of the best of Britain’s new breed of drummers whose performance credits include Pendragon and David Cross of King Crimson. Wishbone Ash, the quintessential road band, is an acknowledged influence on many other bands including Thin Lizzy and Iron Maiden. Power and melody have made the Ash a hard act to follow, while they are currently being discovered by new generations of loyal rock fans. An exceptional recording and touring career has seen Wishbone Ash weather many changes in record labels, personnel and musical trends. Today, the band is still going strong, with most of their vast catalog intact on CD, an award-winning website and a date sheet the envy of many other bands. More at: http://www.wishboneash.com

w/ The Lint Rollers Formed in 2006, THE LINT ROLLERS could be accurately described as a “nouveau-garage band” generating lotsa raw (though somewhat middle-aged) energy. We pretty much stick to music we love to play, regardless of categorization (mostly “classic” pop, rock & blues), and generally play material that you remember, but didn’t think to ask for. Although we’re frequently and randomly joined onstage by a talented assortment of musician friends, at its core the band is a trio, featuring Mike Cusumano on drums, George Valaes on bass and Joey Donovan on guitar. At most events, we’re fortunate to have Dennis “Torpedo D” Toerpe on the B3 organ. He’s in high demand (and we don’t pay very well) so we still call ourselves a trio, just to play it safe…. Sometimes we call ourselves THE ROLLING LINT REVUE when more of our friends come out to play with us. The name “THE LINT ROLLERS” doesn’t describe much about the band except for our tendency not to take things too seriously. It also provides a nice base for lots of stupid names for gigs, such as “Lintstock”, “Lintapalooza”, “Linageddon”, the Isle of Lint Festival”, “Night of the Living Lint Rollers”, as well as countless bad puns. https://www.facebook.com/TheLintRollers/