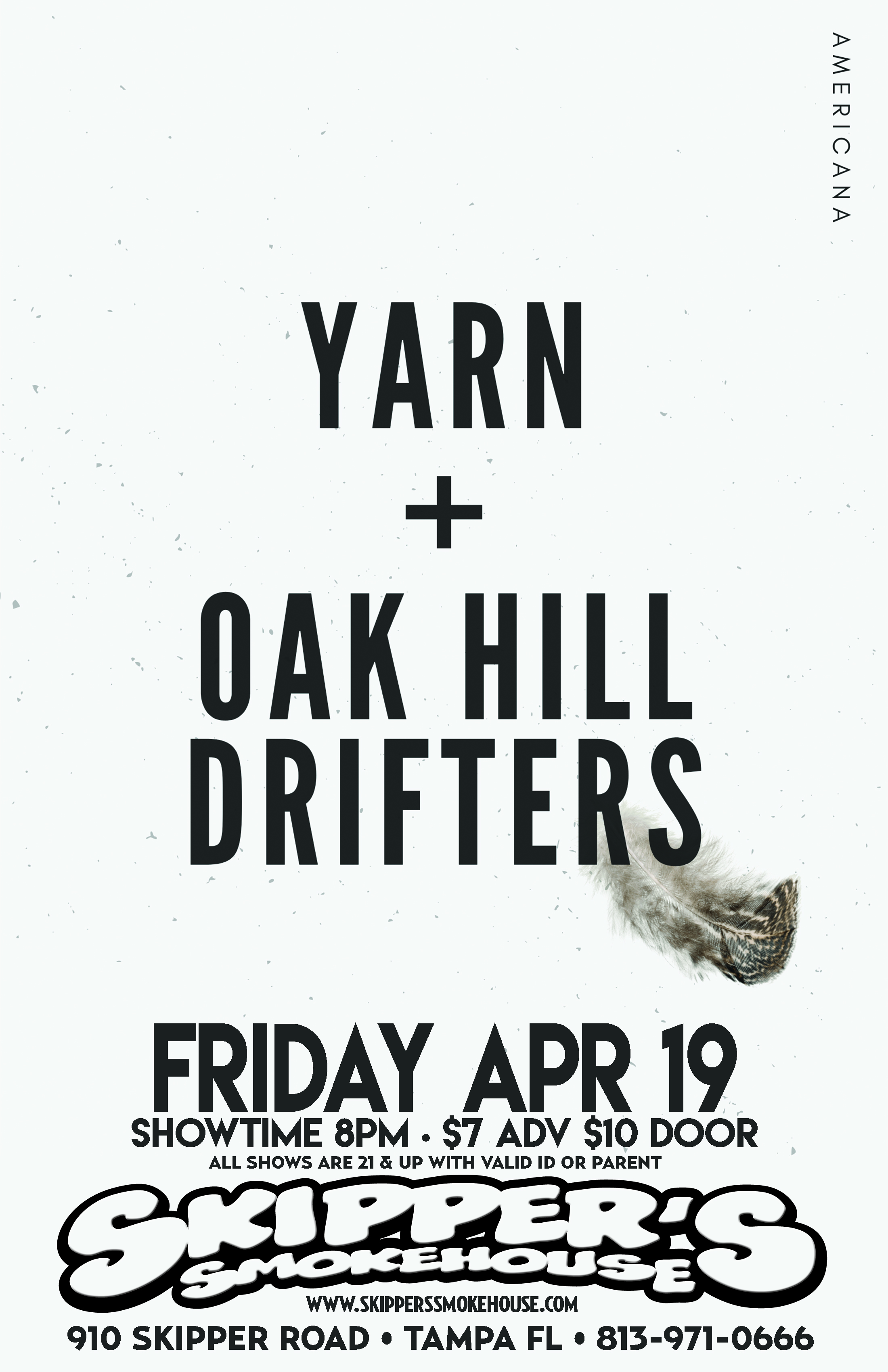 You might expect a band that calls itself Yarn to, naturally, tend to spin a yarn or two. “that’s what we do, we tell stories, live and in the studio, truth and fiction” singer/songwriter Blake Christiana insists. “We don’t always opt for consistency. There’s a different vibe onstage from what comes through in our recordings. There’s a difference in every show as well, you never know what you’re going to get.”

It’s with that in mind that Yarn have announced a series of singles that will be digitally released on the 13th of every month beginning in January and continuing throughout the year. Each “single” will include an “A side”, a “B side” and an exclusive alternate version of one of the songs. Naturally, there’s no better name for the project than “Lucky 13.”

“These are essentially road stories,” Christiana says. “There’s an overriding theme that links these songs in a very broad sort of way, but again, the stories are not to be taken literally. The intention was to share the feeling of what it’s like to spend time travelling from city to city, with all the unlikely experiences that can be encountered along the way.

“People always ask us to tell them road stories,” singer guitarist Rod Hohl adds. “While this batch of songs aren’t exactly literal road stories, most deal with some degree of adventure and adversity as inspired by our tours and treks around the country. Yet like any good story, there’s an imaginative element to it as well. That’s why we’ve decided to release alternate versions of some of the tracks, to provide a glance at the oddities that exist just beyond sight…”

The titles of these tracks summarize the stories at a glance. Hohl describes “Sioux City,” “Road Less Traveled” and “Hurricane” as adventure stories as seen from the perspective of the road. “Too Young” re-imagines that road as an analogy, the highway of life. “Weary,” as title implies, describes the toll taken by that seemingly endless journey. However, there’s also hope on the horizon; “Heaven in You” suggests that there is an oasis out there somewhere. “Promised Land” and “American Dream” offer reason why one might choose to embark upon that sojourn in the first place.

Yarn have never been content to simply ride a wave and see where it takes them. Their last album, This Is the Year, was celebratory in tone and boldly optimistic. A seamless blend of vibrant, inspired, back porch melodies and narrative, descriptive lyrics, it detailed the challenges one faces when life is jolted off its bearings and, in reevaluating relationships, tough choices must be made that sometimes skirting the rules. It was recorded in the aftermath of real life challenges that left the band splintered and unsure of their forward trajectory.

“We were dealing with real life issues,” Christiana said at the time. “Broken relationships, a sense of having to regroup and put some things — and people — behind us. That’s what I was writing about lyrically in the new songs and it became kind of a catharsis. Nothing was contrived. We didn’t have to relate to it in the third person. We were living these circumstances, and that gave us the impetus and inspiration to share our sentiments. Ultimately those setbacks and difficulties led to new opportunities and allowed a little light to shine through.”

Yarn’s ability to persevere ought to come as no great surprise, especially for a band that spent two years honing their chops during a Monday night residency at the famed Kenny’s Castaway in New York’s Greenwich Village. In effect, it allowed them to rehearse onstage, mostly in front of audiences that often ranged in size from five to a hundred people on any given night. Five studio albums followed — Yarn (2007), Empty Pockets (2008), Come On In (2010), Almost Home (2012) and Shine the Light On (2013). The band then took to the road, playing upwards of 170 shows a year and sharing stages with such superstars as Dwight Yoakam, Charlie Daniels, Marty Stuart, Allison Krauss, Leon Russell, Jim Lauderdale and The Lumineers. They performed at any number of prestigious venues — Mountain Stage, Daytrotter, the Orange Peel in Asheville, the Fox Theater in Boulder, the 9:30 Club in D.C, South by Southwest, the Strawberry Festival, Rhythm and Roots, Meadowgrass, Floydfest and more, eventually surpassing 1,000 shows, half a million miles and performances in nearly every state. They’ve driven nonstop, made countless radio station appearances, driven broken-down RVs and watched as their van caught fire. They’ve paid their dues and then some, looking forward even as they were forced to glance behind.

Indeed, the accolades piled up quickly along the way. They have landed on the Grammy ballot 4 times, garnered nods from the Americana Music Association, placed top five on both Radio and Records and the AMA album charts, garnered airplay on Sirius FM, iTunes, Pandora, CNN, and CMT, and also accorded the “Download of the Day” from Rolling Stone. Shine the Light On found shared song writing credits with John Oates (the Oates of Hall & Oates fame), and when audiences expressed their admiration, it brought the band a populist following of diehard devotees, popularly known as “the Yarmy.”

As odd as that might seem, it’s proof positive that the Brooklyn and Raleigh based band — which is currently comprised of Blake Christiana, Rod Hohl, bassist Rick Bugel, and drummer Robert Bonhomme — have made their mark, and in dealing with their emotions, scars and circumstances, they find themselves in a position to share those experiences with others who have juggled similar sentiments.

Then again, one needn’t take them at their word. When one unravels Yarn, it’s best to add one’s own interpretations. https://yarnmusic.net/home

The love of early 20th century American roots music is very apparent with Oak Hill Drifters, who are based out of Orlando, Florida.  Their music and performance echos the 1940’s – 1960’s paying homage to some of the great music pioneers of rockabilly, western swing, jump blues, country and the foundation of R&B.

The band’s current iteration was formed in 2014 where its founder, Tommy Cooper recruited an all-star cast of performers including Rachel Decker, Craig Roy, George Dimitrov and Tom Pearce whose collective resumes include work with The HoneyBees (Chicago), Nick Curran, Hindu Cowboys and Rocket-88 (Orlando).  Tommy and Rachel’s impeccable vocal harmonies capture the essence of great duos of the past, reminiscent to the likes of the Everly Brothers and Louvin Brothers.

​​In 2016, the band released its debut 11 song compilation, “Fly Off The Panhandle.”  The band’s sophomore recording, “Lied To Me” was released in June 2018.   http://www.oakhilldrifters.com/home.html